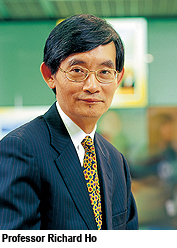 The Council of City University of Hong Kong (CityU) has appointed Professor Richard Ho Yan-ki as Acting President of the University with effect from 1 May, 2007.

Professor Ho’s appointment will expire on 31 Dec, 2007 or the date a new president is appointed, whichever is earlier. Professor H K Chang, President of CityU, will retire on 1 May, 2007.

At a Council meeting today, members of the Council endorsed the proposed appointment of Professor Ho, currently Vice-President (Undergraduate Education) of CityU. Joining CityU in 1990, he was Head of the Department of Economics and Finance and became Dean of the Faculty of Business at CityU from 1995 to 2001. In 2001, he took up the provisional provost to head the then College of Higher Vocational Studies. In 2005, he was appointed Dean of Undergraduate Education. He became a Vice President in 2006. He is currently also Professor (Chair) of Finance.

Council Chairman Mr Chung Shui-ming said Professor Ho is a suitable person for the job because he is in charge of undergraduate education, a major challenge of the University, and plays a pivotal role in designing and executing the University’s transition from a three- to four-year curriculum.

Professor Ho, 55, said he was honored to be appointed Acting President. “CityU people can do marvelous things in a short period of time,” he said.

Professor Ho thanked President Chang for his guidance over the years. Moreover, he said, “With the support of the Council, alumni and the community, colleagues and students can face challenges ahead of us and make contributions in professional education and applied research to Hong Kong, the Pearl River Delta and beyond.”

As the presidential search process is ongoing, the composition of the Search Committee for a New President will remain unchanged. The Committee comprises the Council Chairman, four external members of the Council, three members elected by the Senate and one staff member elected by all regular full-time staff of the University. The President of the Students’ Union serves on the Search Committee as an observer.

Council members endorsed recommendations to tighten the confidentiality rules related to the search of a new president. Members in the Search Committee will be asked to sign a statement to abide by the rules. Any violation of the rules will be investigated and, if the individuals involved are identified, the Chairman reserves the right to remove them from the committee and institute disciplinary action.

The Council today also considered a summary report on the investigation into the complaint lodged against the Deputy President in relation to the article published in the Next Magazine of the 12th October 2006. The Investigator reported that after hearing the evidence of relevant parties and witnesses, he was unable to conclude that the case should be dismissed. Accordingly, the Executive Committee has resolved to establish a Disciplinary Panel to conduct an inquiry into the case.