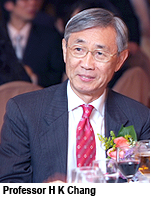 On 19 April, more than 300 students and colleagues from City University of Hong Kong (CityU) plus prominent leaders from Hong Kong society bid farewell to Professor H K Chang, University President, at a high table dinner organized by the Students’ Union.

The occasion was Professor Chang’s retirement, and it was the largest-ever high table dinner that the Students’ Union had organized.

Everyone dressed according to the theme, “Once in a lifetime, the most unforgettable”, and there were plenty of photo-opportunities with the guest of honour, Professor Chang.

The event was a time for reflection and contemplation. 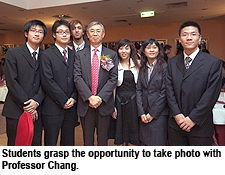 At the start of the dinner, the master of ceremonies invited participants to jot down their future expectations, and CityU students were encouraged to mingle with and learn from the attending leaders from society.

Mr Alan Leong Kah-kit,Legislative Councilor and an officiating guest at the dinner, wished Professor Chang a happy life post-retirement and hoped that the President would continue to contribute to the local education sector. 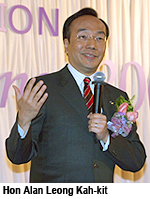 Mr Leong chatted with students about his political career, pointing out that controlling when and how challenges emerge in life was not always possible and that preparation was the key. He encouraged students to get involved in extra-curricular activities and to improve their communication and interpersonal skills by mixing more with their fellow students. Doing so could help them to better understand their own strengths and weaknesses, he said. 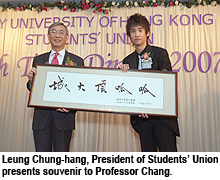 On behalf of the CityU student body, Leung Chung-hang, President of the CityU Students’ Union, presented Professor Chang with some Chinese calligraphy that read “CityU Number One!” (城大頂呱呱).

“We are very proud of you, Professor Chang!” Leung Chung-hang said, summing up the feelings of everyone in attendance.

After thanking the students for their gift, Professor Chang said he had mixed feelings about leaving CityU, but that he also had a strong sense of satisfaction. He looked forward to celebrating the 40th anniversary of CityU with the students who by that time would probably be married and leading successful careers.

“Your success will be my greatest satisfaction!” Professor Chang said. 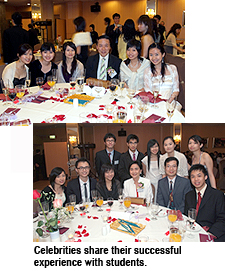 Professor Chang told a story about when he once climbed the Lion Rock. From the top, he could see two different cultures beneath him. On the south side lay Hong Kong Island which had developed under British colonial rule and on the north side were some small villages which dated back to the early Tang and Song dynasties. He felt that Hong Kong people could be proud of the “Lion Rock Spirit”, where traditional Chinese and Western cultures merged.

“On top of the mountain,” Professor Chang said, “I saw a very beautiful scene. At that moment, I felt that I should make Hong Kong my home and motivate myself with the ‘Lion Rock Spirit’.”

He hoped that CityU students and staff could preserve that spirit, respecting the traditions of hard work, appreciating culture and learning from others.