Passing on the spirit of caring through music

Music is universal in its appeal and so to celebrate the 10th Anniversary of the return of Hong Kong to China, City University (CityU) Choir debuted the musical A Wide Wide World Out There at the South China University of Technology in Guangzhou on 18 March. This was the first time the musical has been performed in mainland China.

A Wide Wide World Out There is based on the book To Touch the Untouchable Sky which was written by Zi Wu, a CityU student who fought leukemia from childhood and who died aged 23 after contracting HIV during a blood transfusion. It is also based on Endless Song of Life by Zi Wu’s mother Ms Lee Wai-chun who wrote her story in memory of her son.

Mr Joseph Chan Kai-nin, Director of Student Development Services at CityU, led the CityU delegation to the South China University of Technology. “This performance was a first for CityU for several reasons. It is the first creative work based on the true story of a CityU student and it is the first time a musical has been performed at a mainland university by one from Hong Kong,” he said.

Dr Ruth Yee Wing-yu, Associate Director of Student Development Services and Deputy Leader on the exchange tours, was the producer of A Wide Wide World Out There. She thanked the South China University of Technology for the invitation. “The musical comprises music, dance and drama, and it has been really popular with audiences. I hope our show is a fruitful experience for students from both universities,” she said.

After months of rehearsals, City University Choir last month presented a well-received joint performance of the musical with Peiyang Chorus from Tianjin University, and then staged it again at the South China University of Technology on 18 March. 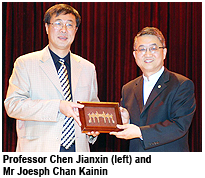 Professor Chen Jianxin, Vice-President of the South China University of Technology, said in his welcoming address that the production was a great beginning for CityU to perform at his campus. “Further exchanges and mutual understanding between university students from Hong Kong and those from the mainland will benefit the development of both regions,” he said.

Professor Chen also said he was delighted with the overall script for A Wide Wide World Out There. “The message is very positive and healthy,” he added.

The audience’s response at the event was overwhelming. The performers were given bouquets during the curtain calls and the subsequent Q&A session was lively and ran over time such was the interest in talking about the show. CityU gave everyone who asked a question a free copy of To Touch the Untouchable Sky while the South China University of Technology presented the performers with a collection of writings by its students. 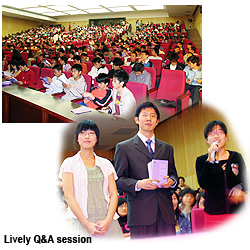 Mr Fong Jun-dong, Vice-Secretary of the South China University of Technology, said the preparations that CityU teachers and students had put into the show had been inspirational. “We should thank the teachers and students at CityU for presenting us with such an excellent production,” he said.

After the performance, the choristers offered their own views. Wong Ging, studying Managerial Statistics, played the role of the young hero Zi Wu. “This has been an invaluable opportunity. Our rehearsals spanned over half a year. I was so touched by the way the audiences responded. It was better than we expected and gave us added motivation,” Ging said.

Yan Tsz-shun, studying Business Management, played the important role of Hermit Chan. “We hope that the audience will be inspired by Zi Wu’s spirit of perseverance. We finally proved that if Zi Wu can achieve it, we can, too,” Tsz-shun said. 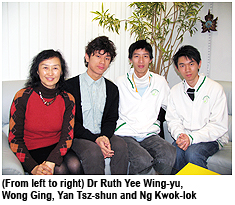 Ng Kwok-lok, a stage hand who also studies Business Management, said the exchange activity was particularly meaningful because students from Hong Kong and the mainland had diverse backgrounds. “We definitely have different understandings about musicals and this opportunity has allowed us to exchange ideas,” Kwok-lok said.

After the performance, Mr Joseph Chan said performing a musical in Cantonese was a challenge, especially since the story had to contain both humour and sadness, but he thought the performance in Guangzhou was even better than the debut in Hong Kong in February.

Dr Ruth Yee said a true story was often more touching than fiction. “We hope everyone will know more about AIDS. We hope to spread the message of love and care through this story and we were very pleased to hear that some of the audience suggested we tour the show around Guangdong province,” she said.

CityU will live on in Zi Wu’s spirit and continue to exchange with institutions from different regions in order to enhance both the quality of teaching and learning.