City University of Hong Kong (CityU) has raised a record high of $205m under the Third Matching Grant Scheme, which closed on 15 March. The amount raised, including the Government's matching grant, will be used to support University development, research and departmental functions, as well as student learning. 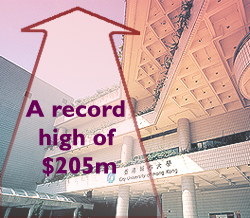 Under the Third Matching Grant Scheme, which was held between June 2006 and 15 March of this year, CityU has generated $120m in funds, which, together with the $82m matching grant from the Government, total more than $200m. This represents an increase of 60% compared to the amount raised under the Second Matching Grant Scheme. This is a new record.

Eighty percent of the donations came from different sectors in the community, including a number of contributions worth more than $10m. Up to $24m (20%) came from members of the University Council, academic and administrative colleagues, alumni and students, all of whom have played a major role in raising the record-breaking funds.

In addition, Professor H K Chang, University President, spearheaded the fund-raising campaign during all three rounds of the Matching Grant Scheme, fostering stronger ties with different sectors in the community and promoting all departmental involvement.

The significant increase in the amount raised represents the community's growing recognition of CityU's commitment to quality professional education and applied research.