City University of Hong Kong (CityU) has raised $200m under the Third Matching Grant Scheme, of which nearly $120m has been generated by the University. 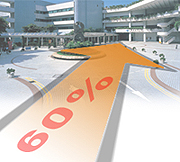 This is a 60% increase on the total amount raised, including the Government's matching grant, under the Second Matching Grant Scheme.

In addition, the number of donors in the current campaign contributing over $10m each has set a new record.

This financial boost is thanks to a series of drives that has raised $117m since June 2006 plus the Government's matching grant worth $80m.

Ms Kathy Chan Yin-ling, Director of the Development and Alumni Relations Office, said the success of the fundraising campaigns was due to the community's recognition of CityU's commitment to quality professional education and applied research.

Ms Chan, who coordinates all University fundraising events, added that the hard work of the entire University community, including members of the University Council, academic and administrative colleagues, alumni and students, had played a major role in securing these funds.

In particular, Professor H K Chang, University President, has made a vital contribution. He spearheaded all three rounds of the fundraising campaign, fostering stronger ties with different sectors in the community and laying solid groundwork for future fundraising endeavours.