Mainland students cherish the opportunity to study at CityU 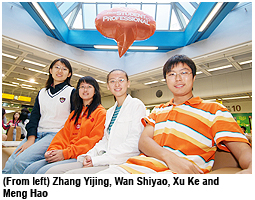 City University of Hong Kong (CityU) officially joined the National Joint College Entrance Examination Scheme (NJCEES) in mainland China last year, through which 400 mainland students have been admitted to date. All of them expressed how they cherished the opportunity to study in Hong Kong and would make the best use of their learning opportunities at CityU to lay a solid foundation for the future. 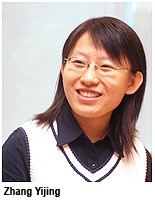 Zhang Yijing, from Beijing, was one of the students first admitted to CityU through NJCEES. In the past year, she actively took part in various residence hall and community activities, such as giving voluntary tuition to children in Shek Kip Mei, a district in the vicinity of CityU. She also initiated a trip to Beijing last month, with the support of the University, to organize orientation activities for more than 50 students who were going to study in Hong Kong and made arrangements for their trip to Hong Kong. Yijing said, "I concur with CityU in its educational ideology that emphasizes whole-person development and cherish the practicing opportunities I was provided with. For the past year, I’ve not only improved my interpersonal skills significantly, but also learned how to overcome difficulties on my own."

Yijing, known for her excellence in academic studies, music and sports since childhood, has just finished the foundation-year courses. Although she is going to study in the Department of Manufacturing Engineering and Engineering Management, she also plans to take up subjects related to accountancy. She said, “The flexible design of the courses at CityU caters well to my interests and needs” She wishes to join the student exchange programme in the second year for an overseas study, and will then decide whether to further her study at CityU or overseas. 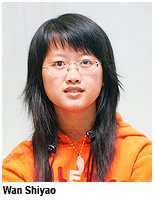 At only 15, Wan Shiyao is currently the youngest mainland Chinese student admitted to CityU. Her hometown is Linchuan, Jiangxi Province. Her past academic scores were so high that she had twice skipped grades and got admitted to the best local junior- and senior-high schools. Growing up in a merchant family, Shiyao has always been interested in international economics and law. She wishes to focus her study on subjects related to business and law at CityU, so as to acquire an in-depth understanding of the operations of Hong Kong, an international financial hub.

Though the semester has just begun, Shiyao is already quite clear about her future development path. She is determined to capitalize on the advantage of studying in Hong Kong, learning as much as she can. She also plans to take part in community activities so that she can serve the Hong Kong society. She said, “I’m studying here on scholarship, and I wish to contribute back to society.” 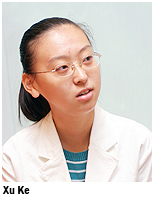 Another student, Xu Ke from Beijing, got a full score in mathematics in the NJCEES this year and was awarded CityU's Single-subject Champion Scholarship. But she is more interested in humanities subjects and wishes to study in the Department of English and Communication next year to improve her English so that she can work in the media industry. She even wants to pursue her interest in becoming a soccer reporter. She applauds CityU’s motto “Officium et Civitas” (敬業樂群) and regards it as a guiding principle for her life and learning.

Meng Hao, who intends to study finance, comes from Liaocheng, Shandong Province. The Faculty of Business of CityU is his first choice. “The Faculty of Business of CityU enjoys a high international ranking. I am deeply honoured to be admitted to CityU. I can’t wait to share my learning experience at CityU with my classmates at home,” said Hao, who is the first student from his hometown city to study in Hong Kong.

Meng Hao’s NJCEES scores ranked the eighth in his alma mater high school. While the top seven schoolmates were admitted to Tsinghua University or Peking University, their first choice universities, he was the only one that marked the Faculty of Business of CityU as his first choice. He said, “Although I am a science student, my aspiration is to enter the finance sector. I believe CityU’s teachers and the training I’m going to receive will broaden my horizon and help me become more flexible and internationalized, which will be assets in my future career development.”