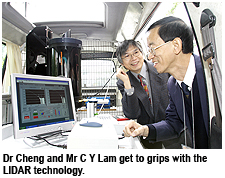 The Workshop on Meteorology and Climate over South China (5-7 Dec) at City University of Hong Kong (CityU) is the first of its kind to address specifically the most crucial meteorological and climate issues facing today.

CityU has the strongest research team in atmospheric science in , with expertise in the area of typhoons, monsoons, atmospheric remote sensing and environmental modeling.

Today’s (5 Dec) opening ceremony was officiated by Professor Roland Chin, Chairman of the 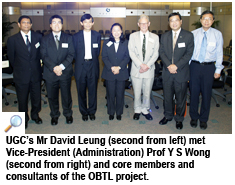 “The aim of the workshop is to promote greater collaboration among scientists in and other countries specializing on the weather and climate of ,” said Professor Chan, during his opening remarks.

“With the rapid economic development and the associated significant increase in the population of the Pearl River Delta region, the weather and climate of South China have recently become a focus in the meteorological community especially in and ,” Professor Chan added. 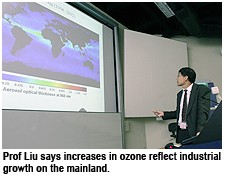 rofessor Wong, in his welcoming speech, said the workshop was a significant event because pollution and cyclones were a concern for the people of , and he emphasized the relevance of CityU’s active role in applied research in this area. Professor Van Hove agreed, saying the themes of the workshop were well suited to the mission of the University, AP and LAR and he indicated that more collaboration and closer interaction across disciplines were vital to improving research.

Continuing the theme of the importance of applied research, Professor Chin pointed out that Hong Kong spent 0.6% of its GNP on academic research, compared to and the which both spend more than 2%. He said universities needed to create high impact research that was relevant to society and could put on the map.

In his talk, Mr Lam said visibility in had fallen by a factor of 4 in the last 15 years. “ is vulnerable to the effects of climate change and pollution because it is the most developed city in the region,” he said.

During the three-day workshop, prominent meteorological experts and academicians from, among others, CityU’s AP and LAR; the of Sciences (CAS); Academia Sinica; Hong Kong Observatory; National Climate Centre; and regional and overseas universities will share research findings during the three-day eve 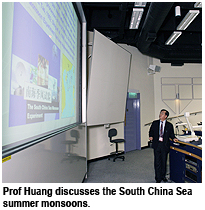 In their keynotes addresses, Professor Liu Shaw Chen, Academia Sinica, spoke about the long-range transport of air pollutants and the implications for the ozone in . He said the increases in levels of ozone were a result of the industrialization of and he noted the “huge” increases in ozone in Tsuen Wan as well as in Tai Po and Central, while Professor Huang Ronghui, CAS, discussed how the South China Sea summer monsoon was affected by the climate in the western .

After the opening ceremony, delegates observed a display led by Dr Andrew Cheng of the AP and LAR of CityU’s LIDAR technology, a revolutionary laser-based system that measures air pollution up to 8km away. The technology is kept in a van to facilitate movement around to monitor the atmosphere.