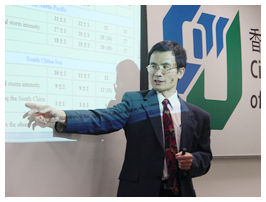 Chair Professor Johnny Chan of the Department of Physics and Materials Science kicked off a press conference announcing his appointment to head Shanghai's Typhoon Research Institute with a bold prediction: "We expect to see about four typhoons in the South China region this year, but the rainfall is likely to be heavy."

A world-recognized authority on meteorology, Professor Chan, who is also Associate Dean of CityU's Faculty of Science and Engineering, has studied typhoons for more than 20 years. Under his leadership, CityU's Laboratory for Atmospheric Research is renowned for its research on typhoon phenomena, particularly in the South China region. The Laboratory's research plays a significant role both in the understanding of typhoons and in the minimizing of damage they cause Hong Kong.

Last year, CityU, the only academic institution in Hong Kong with substantial research in this area, received a HK$3.7 million grant from the Research Grants Council's Central Allocation for a three-year project focusing on South China's weather patterns and to develop a basic system to predict the region's weather changes. CityU is also collaborating with the Hong Kong University of Science and Technology and NASA's Goddard Space Flight Centre on the project.

"Past experience has proven our predictions to have been largely accurate," said Professor Chan, speaking at the 18 July press conference. "Beyond predicting the number of typhoons, we also hope to build an effective approach to forecast wind and rainfall distributions. With such information, we will be in a better position to further diminish the damage caused by typhoons." 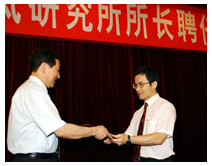 The first outside expert employed by the mainland meteorological section, Professor Chan is keen to share his research experience with his new colleagues in Shanghai. "In the next five to 10 years, I hope to develop closer ties between Shanghai and the major international typhoon institutions, and to accelerate the theoretical and applied study of typhoons on the mainland. A data bank and a website are also on my agenda," he said.