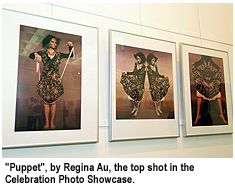 The competition demonstrated CityU's commitment to encouraging its campus community to develop its artistic and creative talents within a broad-based curriculum, said Mr Julian Lee, Assistant Professor in CityU’s (SCM) and a well-known photographer, writer and film-maker.

“The theme of the competition is ‘Celebration’, a concept that we asked entrants to interpret loosely,” Mr Lee said. 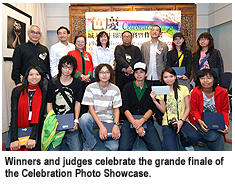 Some of the issues include thoughts on rebellion, identity, family relations and contemporary culture and society. These ideas are brought to prominence through extensive exploitation of photographic genres, such as documentary, still life, portrait, experimental, and fashion photography, and by employing a variety of photographic techniques.

“The competition and exhibition demonstrates the high level of creativity found among CityU students and staff,” Mr Lee said.

The winning entry was a series of three shots taken by Au Wai-yin, a Year 2 SCM student, entitled “Puppet”. This ironic take on the theme of 'celebration' shows women posed like a puppet, the strings replaced by a sash, and lifeless despite her fashion accessories. 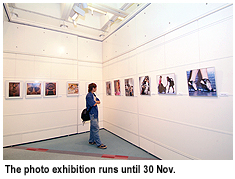 Mr Lester Lee, who has worked for many of the major advertising agencies world-wide, said he was impressed by the high standard of the photographs.

"There's some real talent here and the entrants really know how to create style and atmosphere," he said.

Professor James Moy, Dean of SCM, was given the task of awarding the SCM Deans' Prize to the photograph he would most likely buy.

"I chose Katy Wan's picture because it was very surreal, lively and fun," he said.

All the winning photographs and approximately 80 of the short-listed entries from the competition will be displayed at the CityU Gallery from 10 to 30 November, 10am to 7pm.

There were eight merit awards.