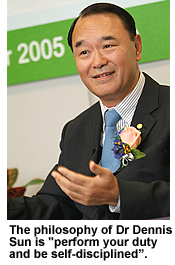 The philosophy of Dr Dennis Sun, a member of the CityU Council and Chairman of the Council’s Community Relations Committee, is “perform your duty and be self-disciplined”. Not only has he enthusiastically supported CityU’s development, he has also taken an active role on education issues and spared no effort promoting charity and cultural activities in the community. At the same time, Dr Sun has run a successful business: China-Hong Kong Photo Products Holdings Limited.

So what is the secret to his success? On 25 October, CityU staff and students met Dr Sun to find out the answer to this question and much more in a Q&A that exemplified CityU’s efforts to create an open campus that encourages intellectual and personal growth.

During the session participants asked Dr Sun about his career and his expectations about CityU; his views on, and secrets of, success; how he copes with changes in society; his opinion on the kind of skills students will need in the future; and his advice for the younger generations.

In reply, Dr Sun said ‘success’ was a kind of recognition that a person won from others, but what mattered most was fulfilling your duty, role and mission. However, orienting every action towards reaching certain targets could be frustrating should events take a turn for the worst, he cautioned.

After graduating from secondary school, Dr Sun studied pharmacy in the US. He then obtained a professional license and he took over the family business in Hong Kong.

“My father was very supportive, allowing me a lot of personal freedom,” Dr Sun said. “When I took over his company, I tried to use innovative and diversified ideas to promote the business.”

Self discipline is a vital consideration because laziness is a major human weakness, and people have to prioritize and then carry out the necessary tasks, according to Dr Sun.

Dr Sun said a person’s undergraduate degree was not necessarily the most significant factor in determining a future career and he encouraged young people to take part in overseas exchanges to help broaden their horizons. He said people skills were essential and, as an employer, he tried to give his employees the chance to develop on a personal and professional level.

Dr Sun also suggested that people should look at both sides of the coin since there were bound to be ups and downs in life. Looking at problems from different perspectives helped solve many of life’s challenges, he said.

The importance of maintaining physical health and getting sufficient sleep was another of Dr Sun’s key messages.

In addition to his work supporting education development, Dr Sun chairs the Board of Governors of the Hong Kong Arts Centre and serves as the Vice-Patron of the Community Chest of Hong Kong. He also chairs its Campaign Committee. 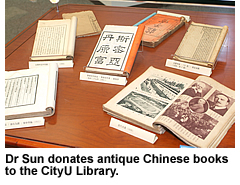 In July 2005, Dr Sun donated over 1,600 antique Chinese books to the CityU Library, the largest collection of thread-bound books it has ever received. The books are mainly classical and historical works, but medical books, Buddhist sutras and gazetteers are included, most of them printed during the late Qing dynasty and early 20th century.

One item is a translation of Inquiry into the Nature and Causes of the Wealth of Nations by Adam Smith, the Scottish political economist and moral philosopher. This study was translated by the renowned Chinese translator Yan Fu in 1901.

Dr Sun’s collection also contains a copy of Wuxu Memorial printed by the famous scholar Kang Youwei in May 1911; Zhuang Zi Snow compiled by Lu Qishan and Chen Jianting in 1977; and Selected Literature Research written by Hu Kejia in 1809.

Of equal interest are Hong Kong publications from the 1950s and 1960s. The most precious is Shang Oracle in Paris published by Jao Tsung I in 1956.

“I would like to thank Dr Sun on behalf of the library and the University because he has not only enriched the contents of our book shelves but he has also contributed to the preservation of antique books,” Professor Ching said.

The books donated by Dr Sun are displayed in the hall of Run Run Shaw Library.

Dr Sun’s connection with the University began with an introduction through Dr Payson Cha Mou-sing, an honorary CityU graduate and personal friend. At the instigation of Dr Cha, Dr Sun began to find out more about the University. Later, Dr Sun joined the Hong Kong Culture and Heritage Commission which was chaired by Professor H K Chang, CityU President, who then invited Dr Sun to join the CityU Council.

Dr Sun said he hoped CityU teaching staff could cultivate quality graduates and he asked CityU alumni not to forget their alma mater.

“As long as we have the same faith and work hand in hand, we will succeed in our cause,” he said.

CityU staff acknowledges Dr Sun’s commitment. “Even though Dr Sun is very busy with his work, he often spares time to take part in CityU activities,” said Dr Eva Wong, Head of the Education Development Office. “He actively promotes a caring culture in the campus and he genuinely cares about students.”

Ms Candy Cheuk, from the External Liaison and Cooperation Office and Ms Pheony Tsang from the Development and Alumni Relations Office, said Dr Sun upheld a positive philosophy towards life and was an example for everyone to follow.

Participants in the session with Dr Sun came from different departments and levels. One was a graduate student from the Faculty of Science and Engineering. He said he was inspired by Dr Sun’s comments on the importance of self discipline. 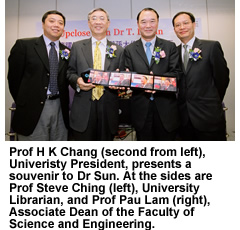 Another participant was a Year 3 undergraduate from the Department of English and Communication who said Dr Sun’s talk was highly motivating and had inspired her to explore a variety of possible career paths and not to limit herself.

Professor Chang concluded the session by thanking Dr Sun for his talk and his support over the years. He presented him with a souvenir on behalf of all staff and students.

Up close with Mr Michael Ying