Up close with Mr Michael Ying 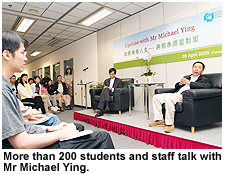 “You and I encounter different problems on a regular basis; hence, problem-solving is part of our everyday life. When we encounter a problem, we should tackle it head-on and be not afraid of failure. The problem then will  be gone,”  Chairman of the Board of Esprit Holdings Limited (Esprit) and CityU Council member Mr Michael Ying said. On 26 April, Mr Ying shared his life and career experiences in the seminar “Upclose with Michael Ying”  organized by the Run Run Shaw Library -- yet another demonstration of CityU's commitment to whole-person development. A full house of more than 200 students and staff participated, asking pertinent and lively questions.

Mr Ying is famous among the elite of ’s business sector. Over the past 30 years, he has developed Esprit internationally -- the business has outlets in more than 40 countries today. He is an award-winner: in 2002, Mr Ying won the DHL/SCMP Best Business Person of the Year Prize; in 2004, he was awarded the Hong Kong Business Mastermind Award by the media. Mr Ying joined the CityU Council in 2004 and is currently a member of the Council's Community Relations Committee. 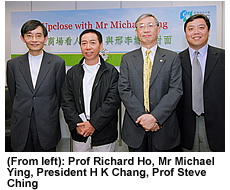 The sharing session began with University Librarian Professor Steve Ching giving a welcoming speech, followed by the Dean of Undergraduate Education, Professor Richard YK Ho, facilitating the discussion. Throughout, Mr Ying warmly shared his viewpoint on various issues, such as corporate management, human resources management and his values. Problem-solving was the topic that garnered the greatest enthusiasm among the audience. Mr Ying stressed that problem-solving is like crossing a river via stepping stones. "In many situations, we’re not 100% sure that we can settle the problem. However, what we need to do is be courageous, face the challenge and not to be afraid to fail. If you can adopt this attitude in the face of adversity, you certainly can find a way out, no matter how difficult it may be,” he said.

was not built in a day, the old adage says; Mr Ying reminded the audience: "Every success is founded on what you have accomplished thus far and what experiences you have accumulated. If you want to be successful, you should set increasingly higher goals for yourself and learn to withstand hardship in order to achieve them.” He said that one's university days are an ideal time for learning and so students should cherish the opportunity and be active learners.

Mr Eddie Yu, Associate Professor in the Department of Management, admired Mr Ying’s “down-to-earth” attitude. "I engage in Chinese management studies and from Mr Ying’s talk I gained some insight relevant to my studies," he stated.

Miss Yeung Mei Ling, a third-year Accountancy student, said that Mr Ying was a good role model. "Through this sharing," she commented, "I learned that when we face a problem, we should adopt a straightforward approach."

Mr Kelvin Chan, a second-year student in the Department of Management Science, valued the chance to talk face-to-face with a University Council member. “CityU’s Council Members do not just contribute to the University through meetings; they care about students too," he said. "Today’s seminar was a prime example of CityU's caring culture." Kelvin hoped that similar events could be organized more often to allow 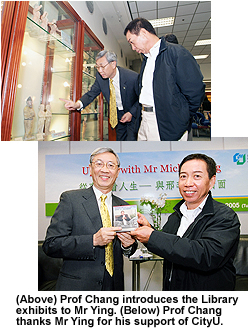 students to interact directly with Council Members and successful people in society. He suggested that the University consider condensing the contents of such discussion series and publish them in a book.

University President Professor H K Chang thanked Mr Ying for his long-standing  support of CityU. He expressed gratitude that Mr Ying spent time sharing his personal experience with University staff and students, thus providing an excellent opportunity for them to learn outside the classroom.