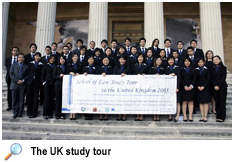 Two teams from City University of Hong Kong’s School of Law (SLW) held their counterparts from to 1-1 draw in a thrilling mooting competition after beating an team in the second round, as part of a study tour to from 22 May to . The tour reaffirmed CityU's focus on internationalisation and application-oriented teaching.

In an unstinting effort to provide students with practical education, SLW, in conjunction with the SLW Mentoring Scheme and the Law 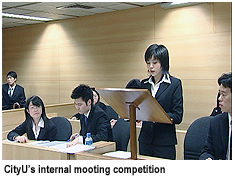 Students’ Society, organised an 11-day study trip to the . The aims were to gain insight into the English legal system, which has had a significant impact on the development of the legal system, and to enable students to develop valuable transferable skills in leadership, time management and mooting. Delegates included undergraduate and postgraduate SLW students from the LLB, LLM, IBL and PCLL programs; and Mrs Anne Scully-Hill, Associate Professor, and Dr Eric Chui, Assistant Professor, of the SLW, as advisors to the delegation. To help groom leaders for the future and enhance students’ organization skills, the SLW students were put in overall charge of setting up all the arrangements for the tour, from initial planning to final implementation.

“Learning 'outside the classroom' is often recognised as an invaluable tool for examining the practical realities of the problems and solutions for a particular subject matter,” Dr Chui said. “Through this trip, participants should develop a better understanding of managerial behaviour such as leadership and conflict management; and most importantly, they can gain cross-cultural experiences that involve socialization, communication and language skills.”

Prior to the Oxford tournament, SLW organised lectures around areas such as introductions to mooting and its basic skills, and basic law and its constitution to boost students’ legal 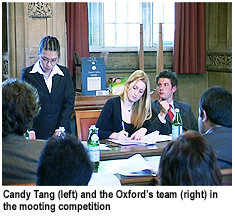 Two rounds of mooting competitions with contract law were held in ’s . The CityU team played in the first match against last year’s internal champions from University. Losing in the first round, the CityU team regained its composure and fought back hard against ’s Collegiate Team in the second round acting for the defendant. The team beat Oxford in this session, a result which led to a draw in the overall competition.

Mr Sardar Abbas Khan, the competition judge and the representative for University, commended the performance of CityU team. “I was impressed by the standard of the CityU team. While both teams are fairly equal, the main reason for the CityU win was their presentation skills and good eye contact,” he said.

Bosco Cheng, leader of the plaintiff team, said: “The concept of the tour is very good. I think the pre-tour moots can equip the mooters with practical mooting skills and enable them to be well prepared for the subsequent moots.  It also helps students build up their confidence in their legal practice.”

Hot on the heels of the mooting competition, the delegation visited two legal institutions in the , namely the Privy Council which had been the Court of Final Appeal in prior to 1997, and the Royal Courts of Justice, the English Court of Appeal. Delegates also visited University College of London (UCL) and King’s College London, both part of the ; DLA Piper Rudnick Gray Cary, the third largest law firm in the world, and ’s , one of the four Inns of Court in . The delegation successfully interacted with other law students and came away with an interesting tour d'horizon about the UK legal system and its jurisdiction.

To promote ’ basic law at universities, two delegates jointly presented a paper at UCL and the and African Studies on the theme of ’s functional constituency in the electoral system.

In addition to CityU's high quality professional education, the SLW continuously seeks ways to bolster the University's fresh focus on internationalisation. Selecting high-calibre law students to participate in prestigious law moots such as the Red Cross International Moot, the Vis International Commercial Arbitration Moot and the Philip C. Jessup International Law Moot Competition, the SLW attempts to promote student learning beyond the university environment and to strengthen academic ties between CityU and its counterparts in the region and around the world.  It also established the Global Gateway programme to offer students the possibility of receiving joint LLM degrees from leading international law schools under the auspices of co-operative agreements with CityU.

The delegation held the Post-Tour Formal Dinner and Closing Ceremony on 24 June 2005.