Some 50 students from CityU’s Faculty of Science and Engineering have formed four teams to compete in the Robocon 2005 Hong Kong Contest to be held at Cyberport on June 25. 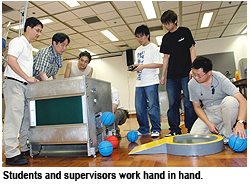 The four teams – “El Nino”, “MEEM”, “Pliant” and “Success,” – will show off their robotic creations, which are sure to impress the judges. By applying their knowledge of information technology and engineering and utilizing their scientific creativity, the students have designed and developed both automatic and manual robots.

The competition is open to all local tertiary students. The winning team will represent in the Asia-Pacific Robot Contest (ABU Robocon) that will be held in in August. The teams will compete with other university teams from 20 Asian countries and cities.

The theme of this year’s Robocon is “Climb on the Great Wall · Light the Holy Fire”. Participating teams are required to have their robots climb up a model of the Great Wall and to place fuel balls (small basketballs 15 cm in diameter) into designated torches and fuel disks at the Bonfire Zone in a three-minute game. 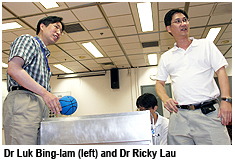 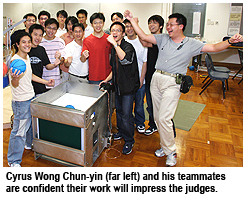 To prepare for the contest, the four teams have recently performed trial manoeuvres and have been working hard on combat tactics. “As our team members come from the Departments of MEEM, IT and EE,” said Cyrus Wong Chun-yin, one of the participating students, “our hand-made robots are masterpieces combining our expertise in electronic technology, computer programming and manufacturing engineering. We feel very honoured to represent the University in this contest.” He is also grateful to the supervisors who work so hard – even missing out on sleep – to develop strategies together with the students.

Dr Luk Bing-lam enjoyed the close interaction with the students. “Through participating in the contest, students can learn about team spirit, develop their creativity and problem-solving skills,” he said.

Dr Ricky Lau believes that the practical experiments conducted for the contest have helped students develop an acute engineering sense that will be useful for their future careers. 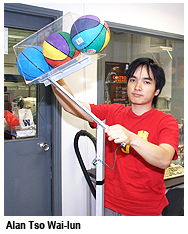 Alan Tso Wai-lun, another participating student, agrees that teamwork is all-important. “All processes from design to manufacturing for successfully making a robot are closely linked and require careful coordination. I am so excited that I can apply my knowledge to turn an idea into a real robot,” Alan said.

The Robocon Hong Kong Contest is organized by Radio Television Hong Kong (RTHK) with Hong Kong Computer Society and the Hong Kong Institution of Engineers as co-organizers. The contest aims to arouse interest in and awareness of engineering and information technology among the public, to encourage the design and construction of robots by providing real experience for future engineers and to provide exposure for local universities on an international stage. On the day of the contest, RTHK will arrange a live broadcast on the internet (http://robocon2005.eTVonline.tv).

This summer, the MEEM will also hold the “Chiang Chen MEEM Technology Workshop” for senior secondary school students. Its staff will teach students how to assemble and programme a robot to solve simulated engineering management problems. Students are invited to download the application form from the website http://www.cityu.edu.hk/meem/techworkshop2005.htm and send it in before June 30.