In what ways can robots be related to love and friendship? Twenty-three Faculty of Science and Engineering (FSE) students, who have formed two teams to enter the Robocon Hong Kong Contest – Lovers’ Reunion on 20 June, will have the answers. Twelve teams from four local universities will be competing in the contest. The winning team will represent at the ABU Asia-Pacific Robot Contest 2004 (ABU Robocon) in , in September. 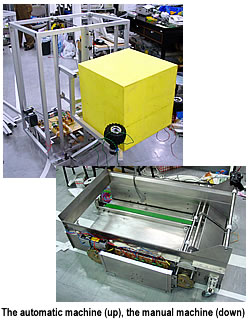 The theme of Robocon 2004 is based on an Asian legendary love story in which two torn lovers, Gyeonwoo and Jiknyeo, are only allowed to “reunion” once a year. The team which can find the fastest way in three minutes for the two lovers to “reunion” will win. The participating robots comprise of two machines: the manual machine will be operated via remote control using cable and will send a signal to an automatic machine which will walk through an unfinished bridge blocked by some small bridge parts while carrying a golden gift from one end to another.

“We become more familiarized with each other’s personality and strength as we work to maximize the stability and speed of our robots,” said Chan Kuok-wai, year-two student in the Department of Computer Engineering and Information Technology (IT) whose team is working on the robot, “CityU Glacier”. “This contest is meaningful to us because in addition to 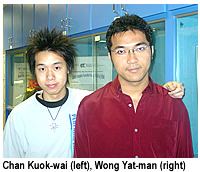 providing us hands-on experience in mechatronics, it offers FSE students an opportunity to come together to exchange ideas and learn to cooperate with each other,” added Chan.

Wong Yat-man, year-two student in the Department of Electronic Engineering (EE), from another team working on the robot dubbed “CityU Volcano” said, “It doesn’t matter if we win or not. The most important thing is whether we have tried our best to finish the task and what is essential is we learn from our team members as well as from other participants’ designs.” 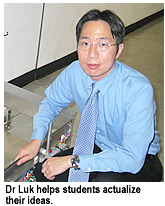 Dr Luk commented that the 23 students are responsible learners who demonstrate positive learning attitude, eagerness to contribute ideas and high cooperative spirit. “The more interaction we have through working together, the more we communicate and therefore the more we understand each other,” said Dr Luk. “Not only the students are learning from each other, I, myself, am also learning from them. They have contributed many creative ideas and as their instructor, my role is to help them actualize their ideas, so this is indeed a precious moment for every one of us.”

Robocon is an intellectually challenging event which gives an opportunity for student engineers to incorporate knowledge in computer hardware and software design and demonstrate their originality in robotic design. This year, is a newcomer to participate in ABU Robocon. The contest will go on air at 7:00 p.m. on 27 June on ATV. (http://robocon2004.eTVonline.TV)

Students and staff who are interested to show your support to the CityU teams may contact Dr Luk at meblluk@cityu.edu.hk for tickets of the Robocon Hong Kong Contest.