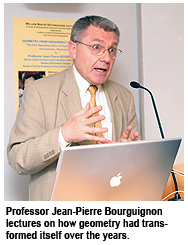 In his lecture “Geometry, From Uniqueness to Abundance -The Ever Repeating Story of Inspired Insights by Astronomers, Physicists”, Professor Bourguignon told a full house of staff and students how geometry had transformed itself over the years. “In a sense, changes in geometry over the centuries were very often achieved not by mathematicians but by suggestions from people outside mathematics,” he said.

Professor Bourguignon used his lecture to illustrate the following key ideas: mathematics as a creation of concepts; how mathematics functions under a double influence, internal and external; and how the philosophy behind mathematics evolved. 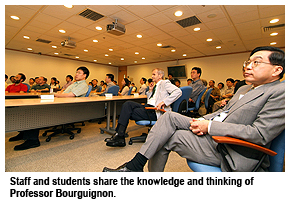 Professor Bourguignon specializes in global analysis with emphasis on applications of differential geometry and theoretical physics. He has been a member of the Academic Europaea since 1996 and member of the Real Academia de Ciencias Exactas, , since 2002. He received the Rayonnement Francais prize in Mathematical Sciences and Physics in 1997. In addition to being the editor of several eminent scientific journals, Professor Bourguignon chaired the international panels that reviewed mathematics for the whole of and the . He is now a member of the mathematics jury of the Shaw Prize, , set up in 2004 to honor individuals who have achieved significant breakthrough in academic and scientific research or application, and whose work has resulted in a positive and profound impact on humankind. The Prize in Mathematical Sciences is among the three annual awards of the Shaw Prize.

“CityU is a very active institution,” said Professor Bourguignon, who was impressed with the energy of the students who attend lectures late in the afternoon at CityU. In addition to giving

the William Benter Lecture, Professor Bourguignon also took the chance to meet visitors from the mainland and abroad in the Department of Mathematics as well as mathematicians from other local universities. This is the third time Professor Bourguignon has visited CityU. He participated in a satellite conference of the Beijing International Congress of Mathematics at CityU in September 2002 and spoke at the International Conference on Mathematics and Its Applications organized to honor Professor Roderick Wong, Chair Professor in the Department of Mathematics, Director of the Liu Bie Ju Centre for Mathematical Sciences, and now Dean of Research and Graduate Studies, on his 60th birthday in May 2004.

The William Benter Distinguished Lecture Series on pure and applied mathematics, launched by the Liu Bie Ju Centre, began in January with Professor Roger Temam of the Université Paris-Sud and Indiana University Bloomington. The second lecture by Fields Medalist Professor Steve Smale, Honorary Professor of Mathematics at CityU and Emeritus Professor at the , , took place on 8 June. The aim of the lecture series is to make available to pure and applied mathematicians, from CityU as well as from the other universities in Hong Kong, the latest results in current issues of outstanding interest.

“The visit of these famous speakers greatly reinforces the University’s international reputation as a leading centre in the applications of mathematics and exposes students to broader horizons in the field,” said Professor Wong.

Students also welcomed the chance to meet with prominent mathematicians. “I’m pleased that CityU furnishes us with opportunities to share the knowledge and thinking of these famous mathematicians,” said Zhao Yi from the mainland, a PhD student in mathematics. “It is very encouraging and inspiring.”