A delegation from of , led by Vice Mayor Mr Wang Guoqun, visited CityU on 2 June.  The purpose of this visit was to enhance cooperation and partnership between the two parties.  The delegation was warmly received by Professor H K Chang, President of CityU, Professor K M Luk, Head of the Department of Electronic Engineering and Mr James Ng, Executive Director of CityU Extension.

CityU has been promoting applied research by working closely with industry to actively develop new products and technologies.  The cooperation has been successfully extended to the mainland through Yantai HiGain-HiTech Co., Ltd. (Yantai HGHT), a subsidiary of CityU Enterprises Ltd.  Based in Yantai City, Yantai HGHT focuses on research and development of mobile communication base station antennae and related products.

In 2003, Yantai HGHT set a milestone in its development with an additional shareholder and working partner – the Shandong Hi-Tech Investment Corporation, which is funded by the Shandong Provincial Government.  This collaboration serves as a testimony of the close working relationship between CityU and the cities and provinces on the mainland as well as the recognition of its outstanding technological researches.  With this new company structure, Yantai HGHT began to focus on converting advanced technologies into products of high market potential. 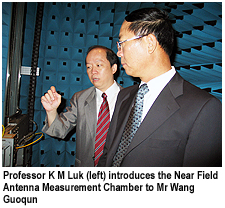 To show the appreciation of CityU’s significant contribution to the economic development of , a delegation of seven officials led by Vice Mayor Mr Wang Guoqun visited CityU.  They visited CityU’s Wireless Communications Research Centre, the Near Field Antenna Measurement Chamber and the School of Creative Media (SCM) and were deeply impressed by the research achievements of the University and the creative works of the SCM students.

Impressed with CityU’s outstanding accomplishments and resourceful pool of talents, Mr Wang said he would like to enhance cooperation in different areas with the University.  Professor Chang expressed his gratitude to Mr Wang and suggested CityU work more closely with the Yantai Municipal Government on business and management training programmes, capitalizing on the University’s expertise in this area.