Mr Julian Lee, Assistant Professor of School of Creative Media (SCM), City University of Hong Kong, has created a unique viewing experience combining art with digital technology—a digital  canvas. The image on the digital canvas changes as the viewer adjusts his distance from it. Mr Lee will stage a digital canvas art exhibition called “Landscape in the Mist” at the Hong Kong Fringe Club from 6 to 21 May, as one of the highlights of  this year’s French Arts Festival (Le French May).

Mr Lee’s interactive art panel is the result of an SCM applied research project on expanded photography that Mr Lee conducted with Mr Phil Shek, SCM Instructor, and Mr Ng Tsz-kwan, a research assistant. Once again, this demonstrates the originality of CityU researchers who explore and pioneer novel creative media. “Rather than an invention, our project is the discovery of an alternative application of LCD and plasma screens, combining the use of computer software and an ultrasonic sensor,” Mr Lee said. He suggested the interactive panel would open up a wide range of possible applications, such as serving as advertisement panels at MTR stations, or as household photos of moving pictures. 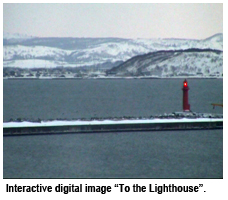 An accomplished photographer and film director himself, Mr Lee explained that while he was traveling in last year, he was struck by the mystic beauty and the sensation of the landscape. “I want to capture the timelessness of the moment on a wall at my home,” he said. So he chose an LCD screen, which eventually became his digital canvas. The “Landscape in the Mist” exhibition is a collection of his photographic works shot in and in , projected onto the digital canvas. Due to “programmed interactivity”, the landscape changes as the viewer changes his distance from the digital canvas. For instance, a red lighthouse by the sea lights up as the viewer walks near it.

“Just imagine what would happen if the panel is used for a slimming advertisement,” said Mr Lee. “The model could appear to become slimmer and slimmer as a viewer approaches. The possibilities are endless.”