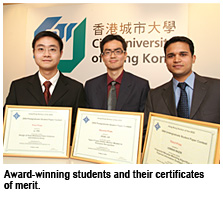 Three students at City University of Hong Kong have achieved first and second prizes in the Postgraduate section and the third prize in the Undergraduate section of the IEEE Hong Kong Section Student Paper Contest held in 2004.

With his prototype of a new, high-performance dual wideband patch antenna and antenna array, Mr Li Pei, a PhD student in the Department of Electronic Engineering, clinched the championship in the Postgraduate Section of the Contest. His winning paper will also represent in the IEEE Region 10 (Asia-Pacific) Student Paper Contests. Compared to the base station antennas commonly used in mobile communication systems, Li’s design is more compact and less costly. The design has already gone into production and a patent application filed with the State Intellectual Property Office on the mainland.

Li Pei obtained his Bachelor’s degree in telecommunications and was awarded as “Outstanding Student” at . His focus is on academic research in electromagnetism. Aware that the EE has a growing pool of professors awarded IEEE fellowships in addition to advanced teaching and research facilities, Li came here to further his studies. He reckons that the support of his supervisor and fellow students has been critical to his success. “I want to express my heartfelt thanks to my supervisor Professor K M Luk, who closely guided my research project and suggested many inspiring ideas,” he said.

Mr Zeng Jia, a PhD student in the School of Creative Media, earned the second prize in the Postgraduate section of the Contest with his research on speech recognition. Based on the conventional speech recognition model called “Hidden Markov”, he proposed a new counterpart using “type-2 fuzzy techniques” to account for uncertainties in speech signals in real-time speech recognition systems, such as those widely used in typing software and telephone directory enquiry.

As a graduate of the Wuhan University of Technology, Zeng Jia understands that there is great potential in the development of media technology and he applies his engineering knowledge to this area. “The is devoted to promoting research and development in both media art and media technology. I have benefited from participating in the SCM’s innovative applied research. Great thanks are owed to my supervisor Professor Zhi-Qiang Liu who first proposed the application of type-2 fuzzy techniques to speech recognition and suggested many creative ideas,” said Zeng Jia.

In the Contest’s Undergraduate Section, Mr Usman Nazir, a fresh graduate in Computer Science, was awarded the third prize for his research paper on fingerprint minutiae matching technology. In conjunction with an effective fingerprint extraction system, the proposed technique results in a fast and reliable fingerprint identification system applicable to matching fingerprint data to a large database. Usman Nazir pointed out that the one-year IT Professional Placement provided by CityU’s Bachelor course in Computer Science attracted him to the University. “The placement arrangement gives students a golden opportunity to apply what they have learned and build self-confidence. I think this is a valuable experience for any university student.”