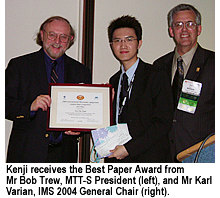 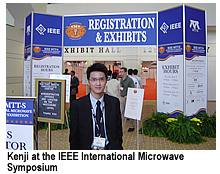 With more than 9,000 members and 80 chapters worldwide, the IEEE MTT-S is a transnational society promoting the advancement of microwave theory and its applications. The IEEE MTT-S Student Paper Contest is part of the annual IMS, aiming to encourage young researchers from academia or universities to present their innovative projects to industry. The quality of student contest papers, evaluated based on originality, quantitative content, and interest to the MTT-S membership, is comparable to that of other papers presented at the Symposium. This year, the organizer received 292 student papers, of which 141 were accepted. Among these, 26 student authors were selected as finalists.

"The 3G phone, which is small, light and yet multi-functional, suffers technical instability and short battery life,” Kenji noted, "and my proposal addresses the problem very effectively." He devised a novel amplifier, which unifies pre-distortion, post-distortion and cubic polynomial distortion techniques for performance enhancement, while maintaining a very simple and compact design. The enhanced amplifier can alleviate the distortion problem and, at the same time, reduce energy consumption by 80%. Successful implementation of Kenji's project would lead to an innovative power amplifier design in the world of 3G and 4G mobile communications systems.

on the sub-harmonic mixers, Kenji contemplated integrating the cubic polynomial distortion technique in a parallel configuration for a simple, low-cost and power efficient circuit level solution. He spent 18 months in developing and experimenting with his invention, making full use of CityU’s state-of-the-art wireless communication facilities.

Kenji Yum received his first-class honours Bachelor of Engineering degree from CityU in 2002. Now an EE PhD student, Kenji is no stranger to international awards. He won Third Prize at the 2003 IMS in Philadelphia with his paper titled "Novel Sub-harmonically Pumped Mixers Incorporating Spiral Compact Microstrip Resonant Cells (CMRCs) for Low-cost Wireless Communications Subsystems". The same paper had also won him the Second Prize in the Undergraduate Section of the 2002 Institute of Electrical and Electronics Engineers (IEEE) Hong Kong Student Paper Contest, and the Championship in the IEE Hong Kong Young Members Section Paper Contest, 2002.