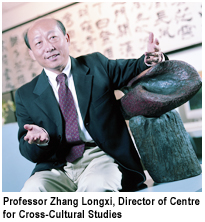 The Selection Committee of the University of Toronto's Alexander Lectures Serieschose Zhang Longxi, Professor (Chair) of Comparative Literature and Translation in the Department of Chinese, Translation and Linguistics, and Director of Centre for Cross-Cultural Studies (CCS) of the City University of Hong Kong to deliver the Lectures under the theme "Textual Encounters/Cultural Encounters", 28 February through . Like the Norton Lectures at Harvard, the Alexander Lectures series is one of the most prestigious lectureships in literary studies in and .Traditionally, these lectures focus on English literature; prominent professors and literary luminaries, including E M W Tillyard, Northrop Frye, and W Jackson Bate, have delivered the Lectures in the past. American author Toni Morrison, awarded the Nobel Prize for Literature in 1993, was the Lecturer in 2002; Terry Eagleton, Professor of Cultural Theory in the Department of English and American Studies at the University of Manchester, lectured in 2004.

Professor Zhang is not only the first non-Westerner, but also the first Chinese scholar to deliver the Alexander Lectures. "I am very happy that my Alexander Lectures will contribute fresh insights, and put the name of the City University of Hong Kong side by side with some of the best universities in the world. The list of distinguished past lecturers, almost a Who's Who in Literary Studies, and the series of books published based on these lectures--many of which become classics in literary studies-- testify to the importance of this lectureship," he says. "This year, East-West studies are highlighted as the best scholars reach beyond the limitations of Eurocentrism and augment a global perspective on our world and our time."

The Alexander Lectures attract a great deal of interest each year. TV Ontario in Toronto will record Professor Zhang's first lecture, a critique of the widely-held view of cultural incommensurability, particularly between East and West, for their "Big Ideas" programme to be aired the following weekend. According to Professor Zhang, "East-West comparisons can be illuminating for reading great works of literature."

CityU’s Centre for Cross-Cultural Studies is devoted to the study of cross-cultural understanding with a clear humanistic emphasis. It promotes research on the interactions between Chinese and other cultural traditions, particularly but not exclusively East-West studies. Taking advantage of the international characteristics of and maintaining connections with eminent scholars and research centres overseas, the Centre is well situated to support high quality research and to make significant contributions to scholarship locally and internationally.