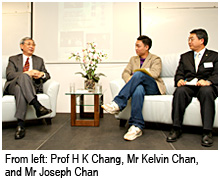 How does one become a good leader?

Interweaving the wisdom of oriental philosophers with the Bible, the Da Vinci’s Code, the wit of the Korean drama Dae Jang Geum, and City University of Hong Kong President Professor H K Chang’s personal experience, the ingredients of exchange between Professor Chang and the more than 40 newly-elected student leaders on 18 February provided stimulating food for thought on how to be a good student and a good leader.

The meeting illustrates Professor Chang’s commitment in strengthening communication with staff and students. 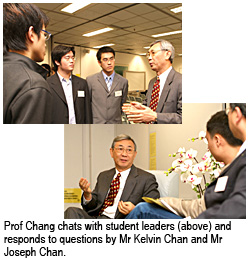 The students enjoyed an interactive discussion of almost two hours with Professor Chang about the aspirations of CityU and what qualities student leaders should possess. Professor Chang set the scene by encouraging students to grasp their opportunity to serve the student population and to live their lives to the full. “The name is one you should be proud of deep in your heart. Upon the shoulders of you student leaders rests the responsibility to make CityU a respected name recognized beyond the campus,” he said. Professor Chang encouraged the students to make sustained efforts to balance their education between the humanities and sciences and technology, and to promote learning inside and outside the classroom.

The pursuit of excellence without limit 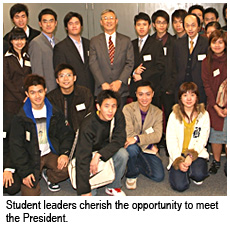 “The world is never perfect, but our pursuit of excellence is unlimited,” remarked Professor Chang. While Mr Joseph Chan, Director of Student Development Services, and Mr Kelvin Chan, former president of the Students’ Union (SU), noted commonalities between Professor Chang and the Renaissance talent Leonardo Da Vinci as knowledge-seekers and as exemplary models of versatility, Professor Chang reminisced that when he was an undergraduate student, success came from his own effort, plus external factors. Despite majoring in engineering and biomedical science, Professor Chang had an avid interest in Chinese, English and History. He recalled that he had the chance to participate in an English recitation contest in his early secondary school days. That experience triggered his interest and then his confidence in English and in public speaking. His love of these subjects, as well as his curiosity about the world, paved the way for his career and leadership role in higher education.

When asked about how to face the current education reforms and the challenges arising from them, Professor Chang reiterated that one should anticipate obstacles and he urged students not to readily accept the status quo. On interpersonal skills, another criterion for being a good leader, he advised students to think from other people’s perspectives. He quoted the Bible----“to be the light of Heaven and the salt of the Earth”----to encourage students to sacrifice for the sake of helping others. “You should give freely first, so that you will gain later,” he said. Other characteristics of a leader include being hardworking and tolerating complaints; the latter is always more difficult than the former. “If one leads a team, one should expect some complaints and criticism from a group within that team,” he added. 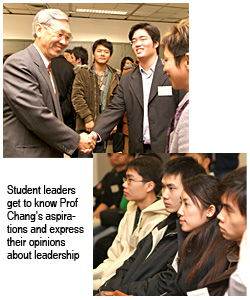 Conquering your first mountain before targeting the next

Another highlight of the gathering was a Q&A session which received an enthusiastic response from the floor. Students raised questions such as “Have you managed to achieve all your goals?” and “How does one strike a balance between serving the student community and studying?” Professor Chang suggested that students focus on their present endeavors and work hard to conquer their first mountain before targeting the next. He said that a good student leader should be a good student first, that is, to work hard, but not just to obtain a high academic score. “Activities outside the classroom are also part of university life. Be true to your own dreams and goals,” he added.

He shared one of his mottos from ancient Chinese wisdom: "You Rong Nai Da, Wu Yu Ze Kang (有容乃大  無欲則剛)", encouraging students to develop good relationships with friends and colleagues . When asked about the qualities of a successful leader, Professor Chang chose the Korean TV drama protagonist Jang Geum to illustrate how, even without all the finest ingredients, by using our ingenuity we can create conditions favorable to success.

Professor Chang further reminded students to enjoy the process of developing themselves. As a student leader, one develops leadership skills gradually, which may not be recognized right away. Student leaders can also intentionally acquire knowledge from books and out-of-discipline courses, and so on.

From newly-elected leaders to final-year students, those at the gathering asked the President numerous other questions, exceeding the allotted time. Professor Chang welcomed them and answered all of them before he left for a dinner scheduled with educators from the mainland.

Mr Douglas Wong, Acting President of the 20th Students’ Union, said, “Professor Chang’s comments gave me insights on planning our future direction. We should set high goals, embrace and fulfill them. I found his sharing on interpersonal relationships particularly inspiring.” The 20th SU is committed to informing the campus community on what’s happening in society, alerting students to current affairs, and expressing themselves. Red Door, the Executive Committee of the 20th SU, comprises 16 members. Together with the SU’s Council, the Editorial Board and other student societies, they serve a student body of 12,000. The Committee names itself Red Door after the main entrance of CityU’s , signifying the continuous influx of knowledge from the outside world.