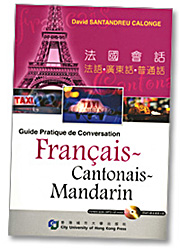 A comprehensive, trilingual phrasebook with CD, Guide Pratique de Conversation Français  - Cantonais -  Mandarin, was launched at CityU, 18 February. The book serves as a useful reference for visitors, business travellers and students from French-speaking countries, the mainland and . It covers a wide range of daily-life situations and is organized in three columns for quick and easy access. 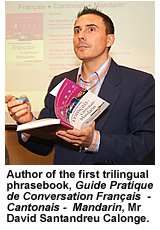 “I wanted to create something that didn't exist; it is actually the first book ever written in those three languages on the market in Hong Kong,” said David Santandreu Calonge, Lecturer in the Division of Language Studies of the Community College of City University of Hong Kong and author of the book, which is published by the City University of Hong Kong Press. This is the first practical, pocket-size conversation book offering up-to-date vocabulary and expressions and including sections on SARS and on trendy extreme summer sports. “I also had to select which user-friendly cultural topics the book should focus on,” Mr Santandreu explained, “so I included notes about , such as famous brands and the latest prices, wines, and cheeses.” 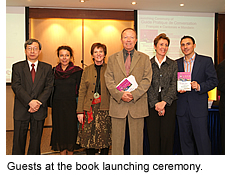 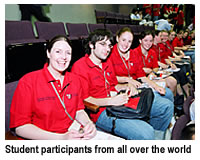 Mr Santandreu considers Cantonese of great importance, both in terms of economics and culture. Furthermore, as 2004 was declared the “Year of China in ”, interest in Chinese language and culture increased exponentially. “If this little book can help promote Cantonese among French speakers, and even Mandarin speakers, I will be delighted,” Mr Santandreu said. This is the first in a planned series of similar language books to be published by the City University of Hong Kong Press.

Established in 1996, City University of Hong Kong Press is the publishing arm of the University. Its mission is to contribute to the generation and application of knowledge, to raise the academic standing of the University and to promote understanding among institutions and cultures through publication of works of scholarship, pedagogy and other works of excellence.

Fresh from the CityU Press