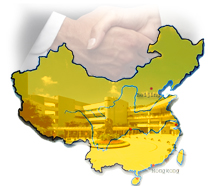 Professor H K Chang, President, is leading a six-member delegation to from 26-29 January 2005, to strengthen ties with the mainland and explore opportunities for more academic and diversified collaborations.

The delegation will meet with Mr Chen Zuoer, Vice Director of the Hong Kong and Macao Affairs Office under the State Council, and officials from the Ministry of Education, as well as representatives from the mainland’s higher educational institutions and media.

The visit aims to expand CityU’s network on the mainland and prepare for future student recruitment exercises by cultivating close ties among various units. In addition to Mr Chen, the delegation is to meet with Mr Zhang Shengxin, Assistant Minister of Education and Professor Chen Naifang, President of Beijing Foreign Studies University.

During the visit, the CityU delegation is to hold a reunion with about 60 alumni and academics who had been to CityU for exchange, study or work. In addition to forging links with alumni and academia in , CityU hopes to establish strategic contacts to facilitate the promotion of future alumni activities on the Mainland.

The visit attracted the attention of prominent media organizations in . The People’s Daily, Guangming Daily, Science and Technology Daily and Xianhua News  are sending reporters to cover the visit.

CityU actively establishes and strengthenes links with the mainland. Through fostering closer ties with Government departments, higher educational institutions, alumni and the media, the visit further promotes the University’s image on the mainland and opens up potential for further collaboration.