“At first, I thought he was one of the many exchange students from the Mainland,” said Phoebe Tse Yuen-man, a second-year Associate of Social Science in Public Administration and Management (ASocSc PAM) student, as she recalled her  first impression of Bai Zhiyi. “But his determination and courage to spread his message — 'To start from me', which aims to further AIDS prevention across 80 China provinces and Hong Kong’s higher institutions, make him a 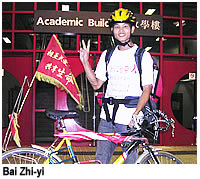 respectable man. He deserves as much public support as we give to our Olympic gold medalists."

Thanks to Mr Chan Wai-to, Senior Lecturer in the Division of Social Studies (DSS) of CityU’s Community College, Xiao Bai (Bai's nickname) met with DSS students and alumni during his visit to CityU, 3-7 September, and shared his mission. With a backpack and a helmet, Xiao Bai set off from his Fujian hometown

in February and cycled to Xiaman, Guangzhou, Shenzhen, and some other provinces in mainland China. Hong Kong is one of his stops, to raise public awareness of the increasing number AIDS contamination through blood donations. “To publicize AIDS prevention, primarily, is to save innocent lives; in the long run, it is to ensure that AIDS will not become a worse burden on our nation's developing economy. Every year, the Government spends huge amounts of money diagnosing AIDS patients,” Xiao Bai explained.

Mr Chan, who met Xiao Bai on the campus, was deeply impressed by his starts-with-me attitude. “He is a very good role model. Young people should have their dreams. It is a driving force for them to grow," he said. "What impresses me most is Xiao Bai’s determination to achieve his goal, despite meager resources." Mr Chan hopes that Hong Kong's young people who have access to more resources in this relatively more affluent society will have as much determination as Xiao Bai in working towards their goals.

has motivated me to get involved in more community services, such as doing volunteer work for the Hong Kong AIDS Foundation; and to take care of the needy, such as AIDS patients, not only children and the elderly, ”

said Ng Wai-nor, second-year ASocSc PAM student. Both Ng and her classmate, Wong Kit-ming, said that they will help Xiao Bai spread his message. “I believe that the more places Xiao Bai visits, the greater the impact he can make,” Wong added .

With five years of experience working for St. John’s Cathedral HIV Education Centre as a project assistant, and assisting local women, youth and newly arrived immigrants understand more about AIDS transmission  and preventive measures, Johnny Lee Choi-hing, a final-year student in the part-time Associate of Social Science in Social Work, suggested that local institutions should jointly organize annual AIDS awareness campaigns, education programmes, and voluntary services to help spread the message. He added that the mass media should take a more positive perspective when reporting on AIDS, since discrimination against AIDS patients still exists in the community.

"To spread the message of AIDS prevention is important, but to realize one's ambition and then to actualize it with courage is also extremely important," she said. She also encouraged first-year students to establish their life goals while they are in university, and to set about achieving them however they can.