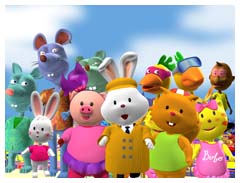 To get a moral lesson into the hearts of children, it might not be enough to just tell them a fable. However, design some fascinating cartoon characters to relay the message and imagine how much more appealing and effective the result!

"Gee-Dor-Dor", for the Independent Commission Against Corruption (ICAC), to promote values such as honesty and fairness among children. These SCM students are the first batch of university students  authorized by a government office to create a 3D animation series.

"It was a meaningful and challenging opportunity to be able to participate in the production of such a large-scale animation series as 'Gee-Dor-Dor'. The team members applied the techniques of storytelling, 3D modelling, editing, lighting and script writing in order to create the series. We have gained invaluable experience not only in production, but also management," said Choi Tang Yik, a second-year SCM student and leader of the production team.

Encouraged and supervised by Mr Philip Lee, Assistant Professor in the SCM, Choi and six fellow students majoring in animation started to plan the project last February. They decided to transform the original cartoon character "Gee-Dor-Dor" from a 2D to a brand new 3D image. In addition, they created many new cartoon characters and scenes to enrich the story content. The final outcome

consists of 10 episodes, each one-and-a-half minutes long, revolving around 26 different characters. “The whole production process took place in our SCM studio. We spent nearly all our holidays and leisure time on it. Despite the demanding nature of the work and certain constraints, we were granted a lot of freedom to do what we deemed most suitable. And we are very happy that our work proved satisfactory to the ICAC,” Choi added. 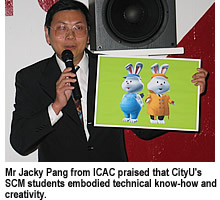 "I appreciate the sense of responsibility and commitment demonstrated by CityU's SCM students. Despite their heavy load of homework, they were able to complete the animation project by the deadline. They embody technical know-how and creativity," remarked Mr Jacky Pang, ICAC Acting Chief of Education and Mass Communication Officer. 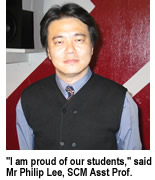 CityU encourages staff and students to participate in community service. "In fact, our SCM students have helped a number of public and commercial organizations to produce promotional or animation clips," said Mr Lee. "Through these opportunities, students put into practice the theories they have learned, gaining practical experience and a better understanding of the work requirements to prepare them for a career in the creative industry. The 'Gee-Dor-Dor' project is successful and won high praise from the ICAC. I am proud of our students," he added.

The "Gee-Dor-Dor" animation series will debut 2 August on TVB Jade, Monday to Friday, 5:05pm, and will be broadcasted until 13 August. Interested parties can also take part in online games specially designed for the programme, available at: www.smallcampus.net/icac/.