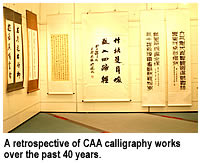 “Calligraphy is a unique art form created by Chinese,” said Professor Cheng Pei-kai, Director of the Chinese Civilisation Centre (CCIV), at the opening ceremony of "The Splashing Richness of Ink and Brushes"on  7 July. The exhibition of works by faculty members of the Department of Calligraphy, China Academy of Art (CAA), will be held at the CityU Gallery, Monday through Sunday, 10 a.m. to 7 p.m. until 29 August. 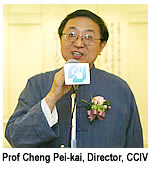 “The exhibition is a rare chance for calligraphy lovers to appreciate works by CAA teachers,” Professor Cheng said, "and the exhibition serves to foster more exchange among calligraphy lovers in and ." The CAA was founded in in 1928, (at that time named the National Academy of Art), as the first comprehensive art academy in . It was also one of the first higher education institutes to set up a calligraphy department for undergraduates. During the four decades since its establishment, the CAA's Department of Calligraphy has enhanced the profile of calligraphy in . 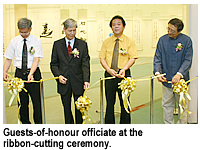 About 50 guests from cultural and arts circles attended the opening ceremony. Organized by the CCIV, the exhibition displays more than 40 works by former and current CAA Department of Calligraphy teachers, forming a retrospective of their great works over the past 40 years. On display are the works of renowned calligraphy masters, such as Pan Tianshou, Lu Weizhao, Sha Menghai, and Zhu Lesan. 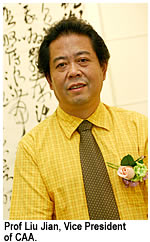 “Calligraphy education has become one of the important resources of the CAA,” said Professor Liu Jian, CAA Vice President. “We hope CityU and the CAA will consider using this exhibition as a stepping stone towards a bridge between art education in  and on the mainland.” Professor Liu also expressed his gratitude to CCIV and the Council of CityU.

Other guests-of-honour were Professor Lee Yun-woon, Research Fellow of the Chinese University of Hong Kong (CUHK) Art Museum and former Head of their Department of the Fine Arts; and the Head of the CAA's  Department of Calligraphy, Professor Zhu Suizhi, whose works are also on display. 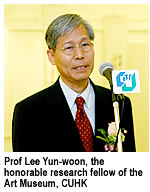 In his speech at the opening ceremony, Professor Lee praised CityU for pioneering  the Chinese Civilisation programme in the undergraduate curriculum in 1998, which, he said, allowed greater appreciation of Chinese arts and culture by university students. “We could say that the calligraphy exhibition today is the most important event of its kind held in since its turnover to ,"  Professor Lee said. “Calligraphy is the core of the Chinese culture. As the art is taken more and more seriously by people, no doubt, such an exhibition will inspire calligraphy admirers ."