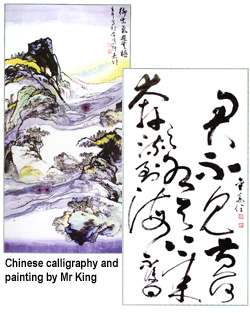 A distinguished painter and advocate of Tai-chi aesthetics, Mr King adheres to four essentials: Bi-Mo (strokes and ink-tones), Yi-Jing (mental image and state), Qi-Shi (life-energy and tendency) and Xu-Ling (insubstantiality and activation). His works are holistic, and transcendental, originating in the ontology of the cosmos of ancient .

The opening ceremony was officiated by Professor Ambrose Y U King, Vice-Chancellor of the of , Dr Darwin Chen, Chairman of the Hong Kong Arts Development Council, and Professor H K Chang, CityU’s President. 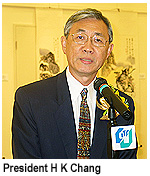 "The exhibition exemplifies Mr King’s commitment to uplifting the value of Chinese calligraphy and painting as part of the cultural heritage", Professor Chang said . "It also shows that CityU, in the previous six years, has made continuous commitment to encourage staff and students to understand Chinese culture through appreciation of different art forms," he added. 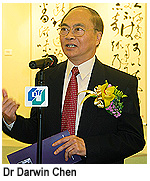 in the style and creativity of his works. Mr King is dedicated to enhancing the development of arts and culture and has proposed to establish an art museum in western Kowloon to provide a place for eastern and western art to meet, according to Dr Chen.

The exhibition, organized by CityU’s Cultural and Sports Committee, takes place from 17 to 24 June, 10 am to 7 pm, at CityU Gallery, 6/F Amenities Building.

Mr King will host a talk on “Modern Concepts in Chinese Calligraphy and Paintings” on 19 June, from 3pm to 5pm, at R6052, 6/F, Amenities Building, CityU.