In recent years, the contribution of creative industries to sustaining a growing economy has been increasingly recognized. The term 'creative industries' refers to industries that are particularly reliant on creativity. It can cover everything from film and television production to computer animation, to Web design. Education and training is an integral part of the rapid development of the creative industries. The City University of Hong Kong's School of Creative Media (SCM) was established to train multimedia professionals to integrate theory and practice, arts and technology. 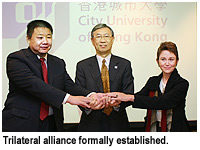 Initiated by University President, Professor H K Chang, CityU has been actively advocating trilateral partnerships with world-class institutions both in China Mainland and overseas. After nearly a year of preparation, CityU's SCM formalized the establishment of a "Trilateral Partnership" with the Beijing Film Academy (BFA) and the School of Cinema-Television of University of Southern California (USC), in a ceremony held 5 July. Following this first trilateral partnership, it is believed that more affiliations in various disciplines are on the way. 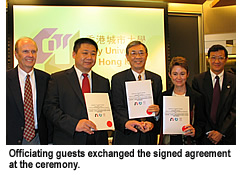 The ceremony was officiated by Professor Zhong Dafeng, Dean of the International School, BFA; Professor Elizabeth Daley and Professor Richard Jewell, Dean and Associate Dean respectively, of the USC; Professor H K Chang, and Professor David Tong, Deputy President and Acting Dean of the SCM. The trilateral agreement builds on the core strengths of the participating institutions and aims to promote academic exchange and deep collaboration. Based on common interests, joint efforts and shared vision and understanding, the three parties have agreed to dispatch academic/research personnel to each other's institutions to participate in joint projects, programmes and exchanges. The institutions intend to provide the new breed of media professionals with more opportunities to develop their skills, and to broaden their horizons.

"It is my deep personal conviction that enjoys great advantages and a unique position in ," said Professor Chang in his opening remarks. "Under the 'One Country Two Systems' arrangement, we can fortify our links with the Mainland and with overseas institutions. can be considered the regional hub of creative industries, which can, in turn, provide a driving force for s economy. CityU is proud to have attracted the attention of the BFA and the USC to Hong Kong, thanks, in part, to Hong Kong's unique positioning and, in part, to the energy and achievements of our staff and students. I am gratified to ally the three schools in a 'win-win-win' situation. This situation probably will be expanded to other fields in the near future." 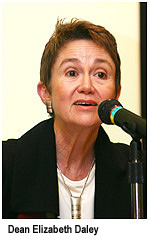 Dean Daley also was excited about the trilateral relationship established among the three institutions. "The USC is now celebrating its 75th anniversary, and as we begin our next 75 years, we're looking to the future rather than the past," she remarked. "We have enormous respect and admiration for the BFA filmmakers and their work. We are delighted to see the remarkable progress made by CityU's SCM students in the past six short years. Through this tripartite partnership, we hope to gain a greater understanding of and the region. We'd like to share with you what we've learned over the last 75 years and look forward to participating in positive globalization through our collaboration." 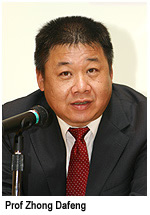 Professor Zhong believes that cooperation and exchanges among the three institutions will benefit each one through sharing resources. He stated that the Mainland needs to learn more about the operation and experience of the film industry in a market economy. In an age of globalization, students need an international perspective in order to meet global challenges. "I'm confident that our joint efforts will create an effective agreement. We'll do our utmost to ensure a successful collaboration which will not only help broaden our students' horizons, but also help the whole Chinese film industry make its way forward," he said.

Professor Chang stressed that the trilateral partnership was initiated and achieved by the three institutions without the Government’s involvement. But since CityU is a Government-funded university, the Government naturally hopes that, ultimately, the University can help cultivate more talents for the benefit of . "With the advantages of our favourable location, bilingualism, multiculturalism, and the rule of law, I believe CityU will be able to take advantage of this partnership to contribute to s economy and creative industry," Professor Chang said. At the ceremony, Professor Chang also shared the idea of having an annual or biannual summer institute in , to be taught jointly by faculty of the three institutions. "It would be attended by creative media professionals from across , not just or the Mainland," he added. The institutions have agreed on the idea in principle, however, implementation details need to be worked out.

Hollywood titans such as George Lucas and Brian Grazer, director and producer of Star Wars and A Beautiful Mind respectively, are graduates of the USC. The USC was the first university in the US to offer a Bachelor of Arts in film. Celebrating its 75th anniversary this year, the School of Cinema-Television of the USC is the oldest film school in the country. Equipped with a fully-digital training facility, the School has had a profound impact. Its alumni have been honoured with many major awards in international film festivals.

CityU's School of Creative Media was officially set up in July 1998, emphasizing the training of multimedia professionals with cultural awareness and the capacity to integrate theory and practice, and arts and technology. The School has developed, from scratch, a full line-up of academic programmes. It has also set up a high-level board of international advisors. SCM faculty and students have won a multitude of international awards and prizes in film, creative arts, digital media, etc. Earlier this year, the School's third year student, Ms Christine To Chi-long, was engaged as scriptwriter for the large-scale, local production film "Jiang Hu''. 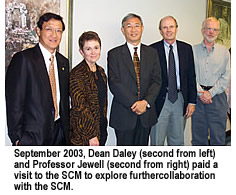 Key members of the USC-CNTV were consultants on the SCM inception team, offering valuable inputs for the establishment and development of the School. Last September, Dean Daley and Professor Jewell paid a visit to the SCM; a month later, a CityU delegation led by Professor Chang visited the USC to explore further opportunities for strategic collaboration. This summer, Professor Chris Swain and Professor Tracy Fullerton are serving as SCM Visiting Scholars and conduct a computer game workshop for CityU students.

Established in 1950, the Beijing Film Academy is the most prestigious breeding ground of Mainland professionals for film and related industries. Its solid tradition, outstanding faculty, well-rounded curriculum, and comprehensive teaching methods make it the Mainland's leading institution for training talented people in the fields of cinematographic production, management and theoretical research. The BFA is the alma mater of world-renowned directors, such as Zhang Yimou and Chen Kaige. Many other BFA staff and students have won awards at home and abroad. 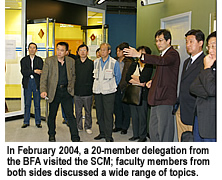 Student and faculty exchange between CityU and BFA started in 2002. Last summer, Professor Chang visited the BFA. In February this year, a 20-member delegation from the BFA visited the SCM; faculty members from both sides discussed a wide range of topics, including curriculum philosophy, student assessment and recruitment. Dubbed the "godfather of documentaries" in China, Professor Situ Zhaodun, was sent by the BFA to the SCM to teach a postgraduate course on making documentaries.

Linking the mainland, reaching out to the world
Professor Chang has written many articles in internal staff newsletters and has communicated with University staff members about the future of Hong Kong and CityU. As an international financial centre situated at the intersection of the East and the West, Hong Kong naturally has been regarded as a bridge between the China Mainland and the world ─ a strong bridge for China, through which it can reach out to the world. If Hong Kong and CityU are destined to serve as bridges, according to Professor Chang, our future graduates will have to be quipped to compete not only on the level of technical expertise, but also with a broader vision and cross-cultural understanding.

The "trilateral partnetship" concept promoting equal partnerships among Hong Kong, the Mainland and overseas countries has been strongly advocated by Professor Chang. It stems from his extensive understanding of the different cultures of the Mainland, Hong Kong, Europe and America, and his belief in creating a "win-win-win" situation. Professor Chang personally led the discussions on the trilateral partnership among BFA, SCM and USC which have now come to fruition.

The trilateral partnership allows students to gain greater international exposure. Meanwhile, it also contributes to Hong Kong as a hub for creative industries. In the light of the ample opportunities unleashed by the Closer Economic Partnership Agreement (CEPA) between the Mainland and Hong Kong, motion pictures produced in Hong Kong can be imported for distribution on the Mainland on a quota-free basis. All these conditions create a landscape favourable to attracting more overseas investment. The trilateral partnership initiated by CityU will help nurture future cadres of new media professionals familiar with the culture and environment in Hong Kong, the Mainland and the US, and well-acquainted with the developing market.