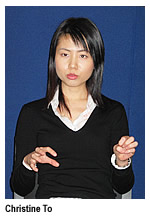 Ms Christine To, final year student of the Bachelor of Arts in Creative Media, is to demonstrate her scriptwriting talents with the debut of her first commercial screening Jianghu in cinemas next month.

Christine’s debut can be traced back to a scriptwriting course assignment. In year two, she enrolled in a scriptwriting course by Mr Patrick Tam Ka-ming, School of Creative Media (SCM) Visiting Consultant and award-winning editor and movie director. Mr Tam's filmography include The Sword, Love Massacre, and Final Victory. He has also won best film editing awards for Days of Being Wild, and Ashes of Time. The course aims to equip students with creative skill in use of image, sound, and space, and understanding of drama and cinematic language. Students are required to visualize and then actualize their scripts through mutual collaboration and participation. In one of her productions, Christine featured the emotional encounters of middle age housewives, which deeply impressed Tam. “Christine is young, but her observation of life, society and human beings is very mature and sensitive,” he said. “Her work is very original, projecting a clear and critical depiction of life and human relationships.” 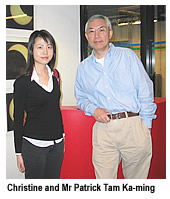 With his connections in the movie industry, Mr Tam referred Christine to veteran actor-producer-director Mr Eric Tsang Chi-wai. Her work received commendations from Tsang who then invited her to write the script for his movie Jianghu. Expected to be another blockbuster in the market following the success of Infernal Affairs, the story is about friendship through brotherhood in triad society.

How can a university student in her early 20s deliver the masculine themes in the story? “I see the relationships through my observation of our daily life. The sense of brotherhood in a triad can also be found among ordinary people in this bustling city,” Christine said. She also gains inspiration from the characters in martial arts novels which she finds similar to those depicted in present day movies.

Through internship and her work for Jianghu, she gained real-life experience with a professional team. Christine completed the script for Jianghu in four months, during which she enjoyed great autonomy. Valuable comments from the producers came in after she had completed the first few drafts. She learned how to deal with different views and incorporate the best ideas into her work. “I could learn a lot through the process and I’m sure the experience will help me further improve my work,” she said. Now, with her task completed and the film to be launched, Christine said she would watch the movie as a regular member of the audience. She also plans to work harder on character design in her future scripts. 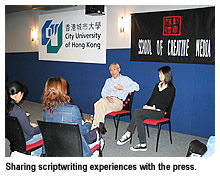 Preparing for a career in the movie industry

Christine treasures her first commercial screening as a chance to test her preparation for a career in the movie industry. She has an avid interest in movies and a wide exposure to different kinds of genres and schools. After taking a few diploma courses in movie making elsewhere, CityU’s SCM was her first choice when she decided to take movie as her major. She finds the training here very fruitful. “We study a wide range of films and critiques in lectures during which instructors inspire us to think about the message behind the techniques. They also keep us abreast with the latest developments in the movie industry,” she said. During her three years of study, she has gained extensive training in different areas of film making, including scriptwriting, directing, photography, and editing. Her short film Longing was a selected title in both the 6thNew York University’s Tisch School of the Arts International Student Film Festival and the 5thTaipei Film Festival, International Student Film Program.