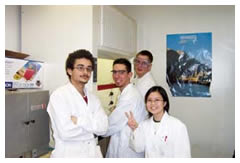 As part of its bid to enrich the learning experience, CityU encourages students to take part in its Student Exchange Programme. Under this scheme, students are eligible to apply for Student Exchange Fund (SEF) sponsorship to study in one of CityU's partner institutions for one or two semesters. Successful SEF candidates receive support up to a maximum of 50% of the total costs incurred for passage, accommodation and incidental charges.

Bulletin interviewed three students about their exchange experience, what they learned and how it changed them.

Ms Gladys Lau returned to CityU in the summer of 2002 to resume her final year of study in the Department of Biology and Chemistry. She experienced the coldest winter in her life during her semester at Canada's McGill University as a second-year exchange student.

"I had to meet some challenges even before I left Hong Kong," Ms Lau recalled. "As McGill University did not arrange accommodation for exchange students, I had to search on the Internet for somewhere to live before my departure. And as soon as I arrived at the airport, I had to find my way to my new home' with all my luggage," she said. "I didn't even have time to buy any food from the supermarket-I had to rush to class. Luckily, I had brought with me some cookies from Hong Kong..." Even more daunting, there was not a single Hong Kong student in her chemistry class. She had only herself to rely on.

Fortunately, after the first two tough weeks, Ms Lau overcame the difficulties and her sunny smiles returned. "In Hong Kong, I was all too used to relying on my parents and teachers, so it was natural for me to complain about things in the beginning. But just because I had to take care of myself and do everything on my own, I became more active and independent and I learned a lot," she said.

She commends the way classes are conducted in McGill, where teachers are more concerned about students absorbing knowledge than preparing for exams. "What we were taught in class was also closely related to our everyday lives. It's really practical and interesting."

Ms Lau was very happy to be given the chance by CityU to study abroad as an exchange student. She hopes that more students can benefit from the programme. "In terms of what I learned and my personal development," she said, "I gained a lot. And it made me appreciate how much my parents care about me. It's impossible for me to describe what I've gained from this fruitful trip."

Ms Clara Lam participated in the Student Exchange Programme at the beginning of her third year of law studies in 2000. She went to Lancaster University in the northwest of England, where she studied company law, international business law and medical law for one semester.

"As law is my major study," she said, "I certainly wanted to receive legal training in Britain. Plus, Lancaster University offers a course on medical law, which is what I have always wanted to learn, but it's not included in CityU's law programme." 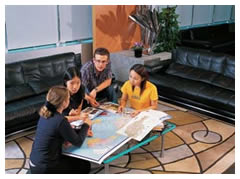 Although she found life in the UK "a little boring", Ms Lam said she appreciated very much the chance to study there. "In Hong Kong, students are spoon-fed with knowledge and information in a passive manner, while in the UK, the emphasis is on independent research and thinking. To participate in class discussions, I had to do a lot of advance preparation on my own. In addition, British students are not at all shy in expressing their views. This all helped me become more independent and willing to speak up. It has helped in my career as a barrister, because I often have to debate a case in court."

Despite the great learning environment, she missed Hong Kong a lot when she needed to do research. "CityU has excellent facilities. As a law student, I often need to do case studies. There's a comprehensive collection of study materials in the library which offers great help in this respect. However, at Lancaster University, I often had to borrow books through inter-library loan. It was far less efficient than CityU."

Although Ms Lam spent only a few months in the UK, it opened her mind to a larger world. "After studying abroad," she said, "I realize that Hong Kong is not the whole world-I'm not only attached to Hong Kong but to the whole world. I became more concerned about world events. When New York was attacked by terrorists on 11 September last year, I felt as shocked as if it had actually happened here. I seem to care much more about the impact from the incident than do my Hong Kong fellows."

"Politics students in Australia need to study many Asian issues," said Mr Tomas Collins, one of three Australian exchange students at CityU this semester. "And I had always wanted to come to Hong Kong, as it's one of the most exciting Asian cities, with its unique culture, politics and economy." When he completes his courses at the end of this term, Mr Collins will return to Murdoch University to receive his bachelor's degree.

In addition to his classroom studies, mr Collins is also using his initiative to learn about Asia. For example, he has just made a trip to visit Beijing and the famous Three Gorges on the Yangtze River in China. "It's a very good learning experience for me. As teachers and books can't teach us everything, I consider going out to see and experience the world is a very important component of learning."

Based on this belief, he has had a very different university life from his fellow students. Instead of rushing to finish his degree programme in three years, he extended it to four years. He worked part time and learned outside the classroom. By participating in student exchange programmes, he's been able to study in different countries: last year he spent six months at Canada's University of British Columbia and this year he realized his dream of coming to Hong Kong. "We're in the age of globalization," he said, "and I've always wanted to learn more about different cultures. Being an exchange student helps me achieve this during my undergraduate days."

Mr Collins said he is very impressed by CityU's outstanding professors, curriculum design and facilities, which provide students with an excellent international learning environment. "CityU has been actively encouraging students to study English, which makes me feel ashamed." he said. "In Australia, we don't know any other language besides English. But Hong Kong students can speak at least three languages."