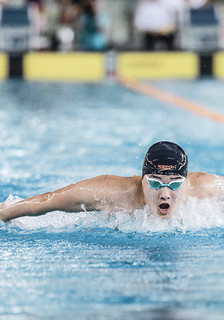 Johnny Lau Chun-leung was awarded two sports scholarships this year, namely the Mr Herman Hu Outstanding Sports Scholarships and the College of Liberal Arts and Social Science Sports Awards. As an exemplary athlete, he was chosen to represent all CityU student athletes to deliver a vote of thanks at the Sports Teams Prize Presentation Ceremony of 2017.

In his speech at the ceremony, Johnny recalled that he started his regular swimming training when he was only 7 years old. With his hard work and the support from his parents, he was selected to represent Hong Kong in the Thailand Age Group Swimming Championship at the young age of 12.

The path of a career, whether it is in sports or in other professions, is not always straight. Johnny went through many ups and downs in his life as a swimmer. Johnny even seriously contemplated quitting the sport right before he was admitted to the University. But with the encouragement from his parents and the coaches from CityU, he decided to carry on swimming and has achieved outstanding results in inter-varsity swimming competition. In 2013 he even represented Hong Kong in the World University Games held in Kazan, Russia. What he has realised is that “every dark cloud has a silver lining”, which means difficult times always lead to better days. Just don’t give up and you will eventually make it!

For 2 consecutive years, Johnny has been appointed as a trainer in the CityU Swimming Team. Johnny is a valuable asset to the team and he loves to share his experience with his fellow swimmers!