Strive for a better world 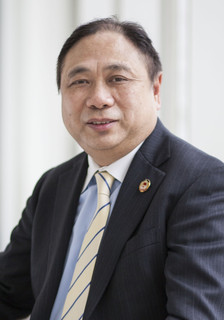 Born and raised in a modest family, the successful entrepreneur, Dr Raymond Leung Siu-hong, learned from his mother the importance of perseverance in early childhood. His diligence and positive attitude towards life have led him to many amazing accomplishments in the hi-tech industry.

While achieving tremendous success in his career, he does not forget about giving back to the community. He aspires to rekindle hope for people in need and inspire them through his personal experience.

“My mother encouraged me to pursue my dreams and motivated me with the strong belief that ‘material poverty shall not deprive a person of their aspirations,’” Dr Leung said.

His mother was a very diligent person, starting work in the early morning every day and rarely taking time off. She instilled in her children strong values and educated them to help others with kindness and generosity, regardless of status and wealth.

Dr Leung envisaged the rapid growth of computer applications three decades ago when personal computers were not yet common. He co-founded SAE Magnetics (Hong Kong) Limited and successfully developed it into a leading supplier of magnetic recording heads for hard disk drives. The company was then acquired by Japan’s TDK Corporation as a wholly owned subsidiary. In 2005, Dr Leung was appointed as Chairman and Chief Executive Officer of TDK China Company Limited, and subsequently promoted to Executive Vice-President of TDK Corporation, the first and the only non-Japanese holding such lofty position in this corporation with more than 80 years of history.

Foreseeing the revolutionary change in mobile electronic devices, he founded a lithium polymer battery company called Amperex Technology Limited (later known as ATL) and turned it into the world’s leading battery provider. Contemporary Amperex Technology Company Limited (CATL), a spin-off of ATL focusing on the development of electric vehicle batteries, has also become a number one manufacturer in the world.

Throughout his life, Dr Leung has held that vision, perseverance, courage and action are keys to success. He hopes his experiences can serve as an example for the younger generation. “Opportunities are for those who are willing to step forward, are well prepared and able to cope with difficulties,” he said.

In addition to devoting his energy to the hi-tech industry, Dr Leung actively participates in charity work and community services. Under his chairmanship, the charity organisation “Give2Asia Hong Kong” has recently donated 400,000 surgical masks to alleviate the shortage in Hong Kong and mainland China, helping frontline medical workers and the underprivileged to fight the Covid-19 pandemic.

Dr Leung has maintained strong ties with CityU, his alma mater, throughout the years. Not only does he bring his invaluable experience to CityU, he also supports the University with generous donations, and motivates and inspires young people to pursue their dreams in technology. “Technological development improves people’s lives, which is why universities’ technology research is highly important. It is crucial yet challenging to transfer research findings and knowledge to commercial products and scalable applications,” Dr Leung said.

He has invested a great deal of time and resources in his alma mater as he sees CityU as an excellent platform for realising his dreams for technology with top-notch talent, well-established knowledge transfer programmes, and close partnership with the industry.

“I want to pass on my mother’s belief that ‘material poverty shall not deprive a person of their aspirations’ so that those who receive help can reach their full potential and create unlimited possibilities for themselves,” Dr Leung said.