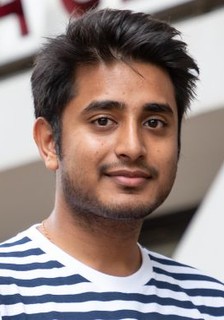 Pixar Animation Studios' 2018 Oscar-winning film, Coco, was critically acclaimed globally. Among those on the credits was Harsh Agrawal, an alumnus of CityU's School of Creative Media who contributed to the film's character texture and shading.

Harsh is 24 and originally from India. At school, he studied mathematics and physics but was also fascinated by the arts, in particular painting. What he dreamt of doing was blending the rationality of science with the sensitivity of the creative arts. The world of animation has proved to offer exactly this scenario, allowing him to fully utilise his talents.

It was Harsh's dream even as a child to work at an international animation studio. Determined to realise this goal, he decided to apply for CityU's BSc Creative Media programme, even though it meant leaving his family and coming to Hong Kong alone. The University's course and opportunities lived up to expectations, teaching him skills and concepts for new media content creation as well as equipping him with further science and computer programming know-how. After graduation, Harsh was soon noticed and recruited by Pixar.

Recalling his years as a CityU undergraduate, he said: “CityU is a young university that demonstrates all the vibrancy of a first-rate academic institution. For example, the day-to-day interaction with teachers and classmates was inspirational. And inspiration is of paramount importance to people in the arts industry. Our teachers always encouraged us to explore and innovate while reminding us to pay attention to society, culture, and new trends to bring both originality and a human touch to our works.”

Harsh received the CityU Top Scholarship for International Students twice and a HKSAR Government Scholarship Fund Reaching Out Award, enabling him to concentrate on his studies. He was also impressed that the School of Creative Media was fully equipped with advanced teaching facilities and equipment. “All these factors helped me to complete my assignments to my satisfaction and keep sharpening my animation skills.”

Important milestones along the way to becoming an animator included an interdisciplinary CityU trip to the Tu Lan cave system in Vietnam in 2015. While the expedition's main aim was to collect environmental data on the underground cavern, it also motivated Harsh to produce some stunning artworks. “I was bowled over by the fresh perspectives the trip gave me on light and shading in relation to people and objects, and this revelation greatly assisted in making my dream of joining Pixar come true,” he said.

Living amid the energetic buzz of Mong Kok was another memorable aspect of Harsh's time in Hong Kong. “Mong Kok gave me a chance to feel the hustle and bustle of urban life, and see the people, street views, and shops. Such dynamism definitely spurred my imagination. My time on campus and life in Hong Kong really injected vitality into my subsequent work,” he said.

Never forget why you started

Last year, Harsh flew back to Hong Kong specially to give a talk to creative media students at CityU. He recently completed production work for Toy Story 4, due for release in June, and is now working at Lucasfilm's Industrial Light & Magic in Singapore.

To those keen to join the animation industry, Harsh suggested that no matter how difficult the challenges encountered to always remember why they started out on their artistic journey in the first place. “On the path to creation, it is inevitable to sometimes be at a low ebb,” he said. “At such moments, just remind yourself of the commitment you made, take steps to relieve the pressure in a sensible way, and you will soon find yourself recharged and ready to face the future.”