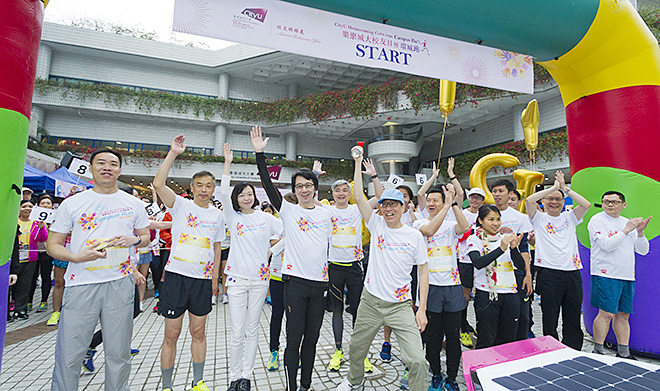 CityU President Professor Way Kuo started the Campus Run that officially kicked off the Homecoming Gala.
More than 5,000 alumni, students, staff and their families joined “CityU Homecoming Gala cum Campus Run 2017” on 19 March at City University of Hong Kong (CityU). Participation in this healthy and meaningful event signaled a wish for the University to scale new heights.
The Gala, under the theme “Let’s march forward for a splendid future”, was hosted by the Alumni Relations Office (ARO). The day kicked off in the morning with the Campus Run jointly organised by ARO and the CityU Marathon Club. Led by Professor Way Kuo, CityU President, and Mr Francis Ngai Wah-sing, CityU Honorary Fellow, distinguished alumnus and Chairman of CityU Marathon Club, around 600 alumni, staff and students ran around campus for a distance of 3.2 kilometres.
In his opening address, Professor Kuo said although they might finish at different times, runners would all meet at the finishing line if they tried their best, drawing an analogy with CityU’s rapid development and our steady rise in international rankings. He said he was grateful to alumni for all their support, saying that it exemplified the unity of all CityU members.

Mr Chan Ka-ho, the holder of a local long-distance running record, and Ms Christy Yiu, who competed in the 2016 Olympic marathon, help participants warm-up before the Campus Run.
The Campus Run, which was launched two years ago at the inauguration ceremony of the CityU Marathon Club, received overwhelming support this year. The Club aims to promote the marathon spirit.
Mr Chan Ka-ho, a coach who holds a local long-distance running record, and Ms Christy Yiu Kit-ching, a 2016 Olympic marathon athlete, shared tips on training and talked about their running experience.
Professor Matthew Lee Kwok-on, Vice-President (Development and External Relations), said alumni could find new developments every time they visit their alma mater, and he was glad to see their enthusiastic support at the Gala, which was filled with more activities than in previous years. 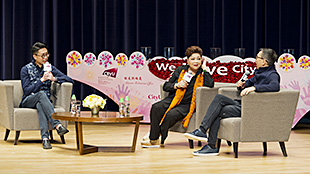 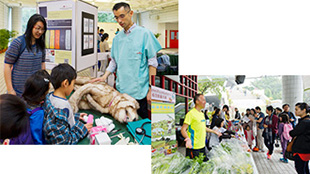 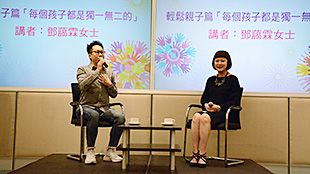