What do we do or not do in the future? 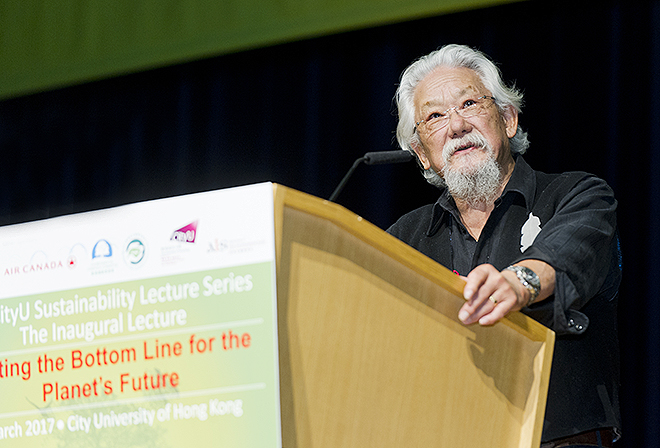 ​“Human beings are so powerful that we are changing the planet,” said a renowned Canadian scientist at City University of Hong Kong (CityU) on 3 March.

The catastrophic change that humans have brought to our planet and the importance of the dynamic role that humans play in surviving as a species in the next century were two of the key points that Dr David Suzuki, an emeritus professor from the University of British Columbia, addressed at the inaugural lecture of the CityU Sustainability Lecture Series.

“The planet will do fine without us,” said Dr Suzuki in his talk “Setting the Bottom Line for the Planet's Future”.

Economic activities and technological developments had caused serious destruction to our planet, he said. “What do we do then?” he asked.

Humans should prioritise nature, he insisted. “Humans are not the centre of everything. We live in a place constrained by nature, our Mother Earth. We should treat the planet the way we treat our mothers.”

Dr Suzuki concluded his lecture by urging world leaders to put ecology back to economics.

Dr David Suzuki is a scientist, broadcaster, author, and co-founder of the David Suzuki Foundation. He is Companion to the Order of Canada and a recipient of UNESCO's Kalinga Prize for Science, the Inamori Ethics Prize, the Right Livelihood Award, and the UNEP's Global 500.

The lecture series is organized by the Department of Asian and International Studies, and supported by CLP Power Hong Kong Limited and the Hong Kong government’s Environment and Conservation Fund. The lectures will build further awareness in Hong Kong about global environmental issues, particularly among students. Audiences will be exposed to key local and international voices on sustainability and asked by the speakers to think about local applications.