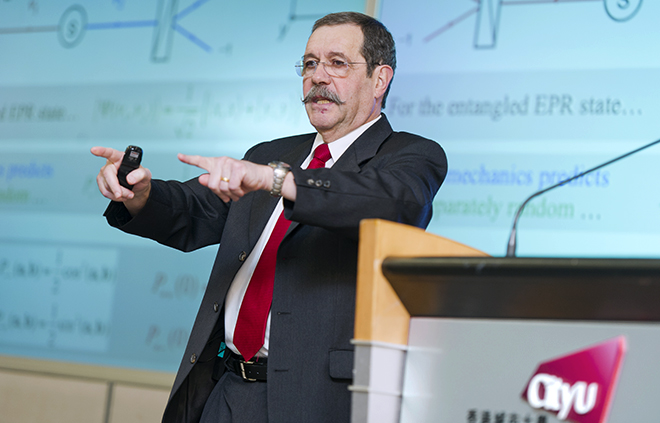 The understanding of the extraordinary properties of entanglement has led to a new quantum revolution, according to a renowned French physicist at City University of Hong Kong (CityU) on 20 February.
Speaking at the latest installment of the CityU France-Hong Kong Distinguished Lecture Series titled “From the Einstein-Bohr Debate to Quantum Information: a New Quantum Revolution”, Professor Alain Aspect from the Institut d’Optique Graduate School, Palaiseau, explained the quantum debates between Albert Einstein and Niels Bohr at the lecture.  John Bell settled the debate by proving that the revolutionary concept of entanglement was a reality, he added.
Professor Aspect said hardware based on different physical principles allowed for the emergence of new concepts in information processing such as quantum computing, quantum teleportation, quantum cryptography and quantum simulation.
He concluded that entanglement was at the root of most of the schemes for quantum information. It was a revolutionary concept and drastically different from concepts underlying the first quantum revolution, he said.
Professor Aspect is a member of the French Academy of Sciences and Foreign Member of the Royal Society, UK. He was given the Wolf Prize in Physics in 2010. The France-Hong Kong Distinguished Lecture Series is under the auspices of the French Academy of Sciences.
​