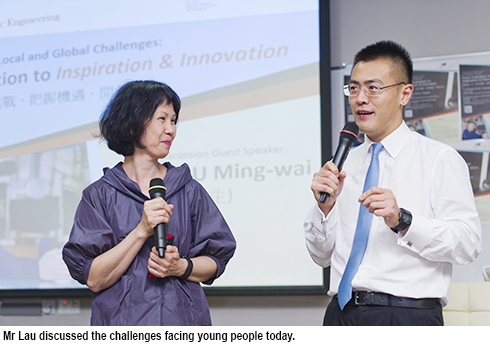 The Chairman of the Commission on Youth shared his views on the challenges, pressure and opportunities facing young people at a panel discussion organised by the Department of Electronic Engineering at City University of Hong Kong (CityU).

Mr Lau Ming-wai, also a Council member and Honorary Fellow of CityU, said he hoped to understand young people’s thoughts more through the event, which was titled “Hong Kong Youths’ Local and Global Challenges: From Frustration to Inspiration & Innovation” and held on 4 October.

The situation for young people now was more difficult than it was 30 years ago, Mr Lau said, pointing out that they now had to face competition from Hong Kong, mainland China, and even the rest of the world.

But he said that making more options available for young people might not necessarily be a good idea because there could be more possibilities and traps in terms of further education, choices of major and making friends.

The moderator of the discussion, Professor Stella Pang, Head of Department of Electronic Engineering, asked Mr Lau how he selected the right candidates from among the hundreds of applicants wanting to join his company.

He said there were two factors: a willingness to learn and a passion for work. He explained that it was not easy for fresh graduates to find their dream job, but he encouraged young people not to give up.

He also reminded students to treasure their four years of university life and to try all kinds of new experiences.

“Your GPA is less and less important and young people have to rely on their qualities and skills to stand out at work,” he said.

When asked if young people in Hong Kong had an international mindset, Mr Lau replied by encouraging students to take the opportunity to communicate and exchange with students from all over the world on campus.

In addition, he talked about how he made friends with people from different countries to broaden his horizons.

“During the nine years I studied and worked in England, I made fewer than five friends from Hong Kong and England. My friends were mostly from Europe and Southeast Asia,” he said, adding that communicating with friends from a range of countries could help young people to develop.