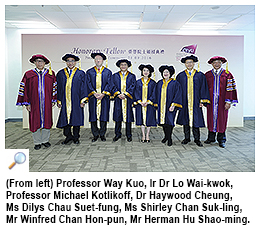 In his welcoming address, Mr Hu thanked the Honorary Fellows on behalf of the University for their substantial support to CityU over the years. “They contribute their experience and wisdom, inspire our students and help CityU to maintain its very exciting trajectory into becoming a truly world-class university,” Mr Hu said. “Their support has been integral to our successes. Our recent performances in global surveys reflect these achievements. According to Quacquarelli Symonds (QS), City University of Hong Kong is now ranked 55th amongst universities worldwide, and is the 7th best university in Asia. ”
Professor Kotlikoff addressed the assembly on behalf of the Honorary Fellows. “CityU has advanced so rapidly in recent years, growing not only in size and offerings but in distinction, stature, and public esteem. I look forward to continuing to work with CityU and its School of Veterinary Medicine in the years ahead, as both expand their impact in Hong Kong and far beyond, educating young people to be thoughtful, productive citizens and leaders in their professions,” he said.