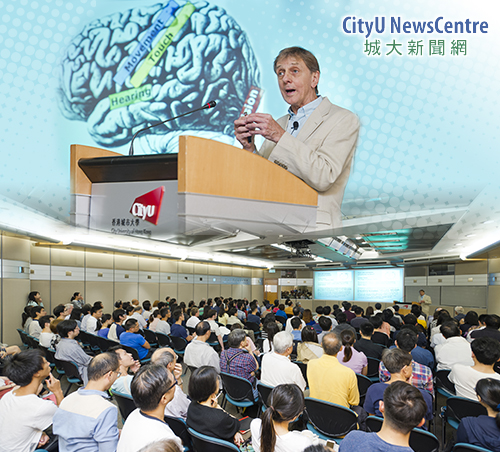 Evolutionary changes in the brain have piggybacked on the adaptive regulation that is essential for the normal development of complex networks in the brain, according to a renowned neuroscientist at City University of Hong Kong (CityU) on 16 August.

Humans have the capacity to reflect on the past and anticipate the future due to their unique brain development, said Sir Colin Blakemore, Professor of Neuroscience & Philosophy at the School of Advanced Study, University of London at the latest installment of the CityU Distinguished Lecture Series.

The lecture was titled “What’s so special about the human brain?”

Sir Colin Blakemore explained the four reasons for a large brain to evolve: 1) genetically controlled enlargement of the brain, 2) reorganisation to incorporate new circuits of neurons, 3) adaptive value in the new organisation, and 4) selection of individuals with larger brains.

Sir Colin Blakemore, Emeritus Professor of Neuroscience at the University of Oxford, is a former President of the British Neuroscience Association and leads a network of philosophers and scientists working on human perception. He also directs the Human Mind Project, which studies the nature and function of the mind.