​Leading scientists from various fields exchanged insights on recent developments and the challenges in the field of genes and chromosomes at a five-day workshop from 11 to 15 August at City University of Hong Kong (CityU).

The workshop, which was hosted by the Institute for Advanced Study (IAS), acted as a platform for international experts to exchange views on genome-wide sequencing studies and further our understanding about gene functions, diseases and chromosomal interactions.

Experts in the field of biology, chemistry, computer science, mathematics and biomedical science delivered 16 lectures during the workshop. 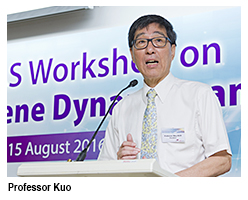 In his welcoming remarks, Professor Way Kuo, CityU President, welcomed participants to the workshop, which is the first that IAS has organised since it was set up, pointing out that the topic of the workshop was an engineering and mathematical problem with business interests, legal aspects and social impact. It was not limited to animals; it was relevant to human beings, too.

He added that animals and human beings existed in close relation and that in collaboration with Cornell University, CityU had established its own School of Veterinary Medicine to study this interaction.

Professor David Yao, IAS Director, shared that the series of events from different fields that IAS had put on recently would act as a catalyst for interdisciplinary research.

After the ceremony, Professor Ada Yonath, 2009 Nobel Laureate in Chemistry and the Director of the Helen and Milton A. Kimmelman Center for Biomolecular Assemblies at the Weizmann Institute of Science in Israel, gave a lecture titled “Species-specific genetic diversity in susceptibility of pathogens: Current situation and future expectations”.

She pointed out that most modern antibiotics act by interfering with ribosomal functions in bacteria. Antibiotics bind to important sites on the ribosomes of bacterial pathogens, preventing the translation of the genetic code into proteins.

"All antibiotics were meant to kill bacteria and it didn't matter whether the bacteria were good or bad," she said. 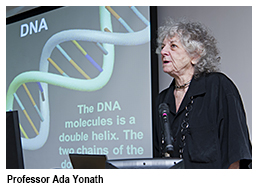 "We're trying to design pathogen specific antibiotics," she added, a goal Professor Yonath called "a revolution in the field".

Established in November 2015, IAS gathers some of the best minds in science and engineering, to pursue curiosity-driven ideas and studies, and to conduct unfettered research based on free and deep thinking.