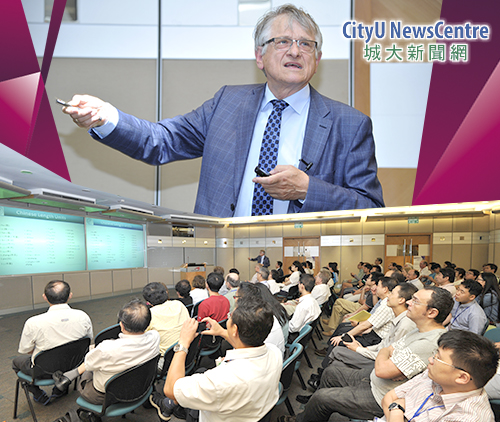 ​The new International System of Units (SI units) will be based on constants of nature which are the most stable quantities, suggested Professor Dr Klaus von Klitzing at a distinguished lecture held by the Institute for Advanced Study at City University of Hong Kong (CityU) on 28 July.

Professor von Klitzing won the Nobel Prize in Physics in 1985 for the discovery of the quantised Hall effect. His lecture was titled “A new International System of Units in 2018!? How my Nobel Prize contributed to this Development”.

The quantised Hall resistance plays a crucial role in the implementation of new SI units. This quantum resistance can be used for a new realisation of a kilogram by comparing electrical and mechanical forces with the Watt balance.

He concluded that basic research on silicon MOSFET, a type of transistor used for amplifying or switching electronic signals, had opened up the possibility of new SI units based on fundamental constants.

Professor von Klitzing became the Director and Scientific Member at the Max Planck Institute for Solid State Research in Stuttgart, Germany in 1985. He is heading the Department of Low Dimensional Electron Systems at the Institute.