The digital media revolution was the topic under discussion at the 22nd International Symposium on Electronic Art (ISEA2016) held at City University of Hong Kong (CityU) and a number of other venues throughout the city last month.

Founded in the Netherlands in 1990, ISEA is an international non-profit-making organisation that fosters cross-cultural and interdisciplinary exchanges among academics and artists working with art, science and technology. It is one of the most prestigious annually held global conference series in the field of electronic art, art and technology, creative technology, and new media art.
ISEA2016 was organised by the School of Creative Media (SCM), together with the School of Design at Hong Kong Polytechnic University, Videotage, and Microwave International New Media Arts Festival.  Held from 16 to 22 May, the symposium attracted over 450 delegates and highlighted the cutting-edge work of artists, scholars, technologists and practitioners from over 30 countries.
Under the main theme “Cultural R>evolution”, ISEA2016 included a range of sub-themes addressing art and technology from different perspectives, ranging from computer games and techno-sex to hybrid forms of animals and technology, and from code and politics to new cultural heritage.

The Cultural R>evolution Juried Exhibition kicked off with a grand opening at the Run Run Shaw Creative Media Centre (CMC) at CityU on 18 May. Among the guests were Professor Richard Allen, Dean of CityU’s SCM; Professor Jeffrey Shaw, Chair Professor of SCM, Artistic Director of ISEA2016 and a member of the keynote panel speaker; and Dr Olli Tapio Leino, Assistant Professor of SCM, Symposium Director and Conference Chair of ISEA2016.
A magnificent video-mapping performance on the CMC facade titled “Burning Too”, part of the ISEA2016 Juried Exhibition, was presented by Professor Don Ritter of SCM to celebrate the opening ceremony.
Professor Maurice Benayoun of SCM was the Chair of ISEA2016 special events and the Head of Open Sky Project. On 17 May, a kick-off ceremony was held in the Hong Kong Maritime Museum. Artists presented video projects on the facade of the highest tower in Hong Kong, the International Commerce Centre in West Kowloon, for this event. Six official selections and 22 artworks that received honourable mentions were presented for viewing. 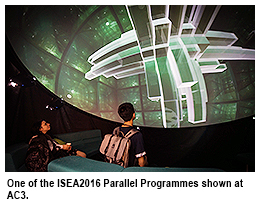 The symposium resulted in two publications, the Catalogue and the Proceedings, which are available from SCM.
ISEA2016 was supported by the Hong Kong Arts Development Council, Goethe Institut, and Meetings & Exhibitions Hong Kong. ISEA2016 was sponsored by the Croucher Foundation; Institut Français; K11, K11 Art Foundation; Consulate General of France in Hong Kong and Macau; and the U.S. Consulate General in Hong Kong and Macau. Venue partners for ISEA2016 were The University of Hong Kong; The Chinese University of Hong Kong; Connecting Spaces Hong Kong/AIL/Zurich University of the Arts; Hong Kong Maritime Museum; Sun Hung Kai Properties; and XXX Gallery. Media partners for ISEA2016 were Art Asia Pacific, Goodest, and Keypad.
​