Distinguished lectures on negative capacitance and neurobiological approach to language 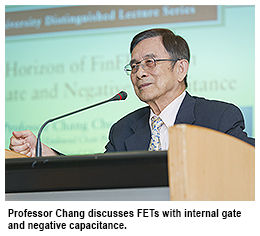 The development of the negative capacitance gate FET (field-effect transistor) has made Taiwan the world’s top semiconductor base, Professor Chang said in his talk on 3 May. His talk was titled “New Horizon of FinFETs with Internal Gate and Negative Capacitance”.
Professor Chang is a leading expert in the areas of microelectronics, microwave and optoelectronics. He has contributed enormously to Taiwan’s electronics industry, education and material technology. He established Taiwan’s ­first Semiconductor Research Center (SRC) at NCTU, and is a Member of Academia Sinica and a Foreign Member of the US National Academy of Engineering.
He said versatile FinFETS with an additional internal gate inside of the fin could demonstrate the dream characteristics of high Ion simultaneously with low Ioff, which would be suitable for future IOT applications.
He also presented a new magneto-MIM capacitor that has 100K times energy storage density than Li batteries, adding that it was time to reinvent the transistor. 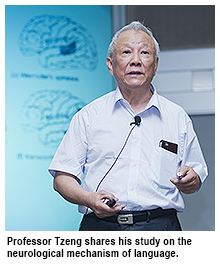 On 5 May, Professor Tzeng delivered a lecture titled “Language, Diversity and Complexity: A Neurobiological Approach to the Three Ss (Speech, Sign Language and Script) of Human Communication”.
A real understanding of language would not be achieved until we had a reasonable notion of its neurological mechanisms, Professor Tzeng told the audience, adding that functional magnetic resonance imaging (fMRI) experiments on native speakers of Spanish, English, Hebrew and Mandarin Chinese revealed variations in orthographic depth.
He argued that the ambiguity of the mapping from spelling to phonology was largely unambiguous in Spanish and highly ambiguous in Chinese, with English and Hebrew falling in between.
Professor Tzeng is a Distinguished Research Fellow and Academician of Academia Sinica. He was the Minister of Education, the Minister without Portfolio of the Executive Yuan and the Minister of Council for Cultural Affairs.