​Research into the miniaturisation and low-power consumption of radio frequency systems led by scientists at City University of Hong Kong (CityU) has won the First Prize in the Guangdong Science and Technology Award. 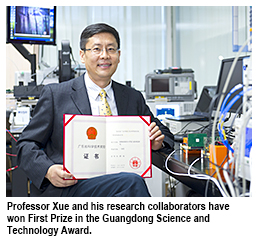 The project was carried out by Professor Xue Quan, Chair Professor of Microwave Engineering in the Department of Electronic Engineering at CityU, and his team which included collaborators from South China University of Technology.

The pioneering development of their award-winning technology is relevant to designing electronic circuits.

The team has successfully converted filters, which block out unnecessary noise, from a component of the circuits into a small element that can maintain performance and efficiency; and also enhance the flexibility of circuit board design.

The objective was to reduce the size of radio frequency systems in wireless equipment such as mobile stations and mobile phones, enhance the efficiency of the systems, and extend the length of their standby time.

These features can provide technological support for energy saving and emissions reduction for green wireless communications and mobile communication industries.

The technologies developed from this project have been used in the Chinese Beidou navigation system and mobile communication systems.

Professor Xue said his team would now apply the award-winning technology to the amplifier in the system, and enhance the fidelity of signals by boosting the linearization and further reducing noise. The technology would also significantly lower costs, he said.

“It was quite expensive to use components imported from overseas. But by using the elements that we invented, the cost can be reduced by more than half,” Professor Xue said. Also, the new elements can lower power consumption and boost performance.

Since joining CityU in 1999, Professor Xue has been engaged in research on filters in radio frequency systems. He said he had been greatly encouraged by the recognition of his hard work in experiments and research projects over the years.

He was all the more gratified because two members of the winning project team from South China University of Technology were PhD students whom he supervised.

Electronic and communication technology industries are the pillars to the economy in Guangdong Province.

The Guangdong Science and Technology Award was set up by the Guangdong Provincial Government with the aim to recognise projects that can contribute to the science and technology fields. It also emphasises innovation, technology transfer and economic benefits.