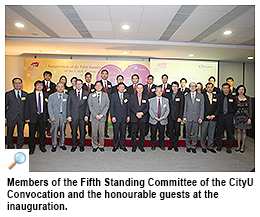 The inauguration of the Fifth Standing Committee of the City University of Hong Kong (CityU) Convocation on 29 April extended the Convocation’s efforts to building life-long bonds between alumni and the University.

Speaking at the ceremony, Mr Herman Hu Shao-ming, Council Chairman of CityU, said alumni were always welcomed to come back to campus to learn about the latest developments at CityU.

Mr Hu said he appreciated the “Giuseppe Castiglione – Lang Shining New Media Art Exhibition” being held at CityU, adding that he hoped the alumni could promote this exhibition and other CityU achievements to the community.

Professor Way Kuo, University President, joined Mr Hu in applauding the Convocation. He said alumni were an important bridge between society and the University. With the effort and contribution of alumni, donations received by CityU have been increasing.

Alumnus Mr Clovis Lau Koong-yep, re-elected Chairman of the Fifth Standing Committee, led the members to take an oath to serve the alumni community and the University. “Our study life in CityU was unforgettable. In order to express our gratitude, the committee will devote to strengthening the alumni network and helping advance the University development,” Mr Lau said. 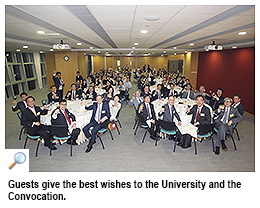 The Convocation, a statutory body established under the CityU Ordinance on 1 January 2007, creates a significant link between the University and its growing band of alumni.