The Director of the National Palace Museum (NPM) in Taipei discussed the life and art of Giuseppe Castiglione (1688-1766) at a City University Distinguished Lecture at City University of Hong Kong (CityU) on 25 April.

Giuseppe Castiglione, also known by his Chinese name Lang Shining, was a native of Milan in Italy. He joined the Society of Jesus in Genoa at the age of 19 and arrived in Beijing eight years later. He worked in the Qing Empire for nearly 51 years.

His paintings, which were highly appreciated by three consecutive emperors: Kangxi, Yongzheng and Qianlong, contained a variety of themes and subjects. He merged Western painting skills and traditional Chinese paper and silk, pigments, and brushes to create a new “Sino-Western” style that expanded the horizons of Chinese painters.

In her lecture, Director Fung discussed many of Castiglione’s artworks, including those commissioned by the emperors about the animals, flowers and gardens in the palace; portraits of emperors, imperial members and high officials; as well as military victories.

“We only know that he worked at Ruyi Hall in the palace through the chronicles of Huoji Dang [Archives of the Imperial Workshops],” Ms Fung said. “We don’t have any personal diaries and only a few of his letters.”

Based on information currently available, NPM produced a film called Castiglione’s Road to China that allows visitors to learn about the life of Castiglione as an artist. The film was one of the items exhibited in the “Giuseppe Castiglione – Lang Shining New Media Art Exhibition” held in the NPM last October.

In addition to Castiglione’s masterpieces, the exhibition held in Taipei last October presented three artworks created by Chair Professor Jeffrey Shaw and his team at CityU’s School of Creative Media (SCM). The artworks are titled “Explore Castiglione’s Flora and Fauna”, “Everyone can paint ‘One Hundred Horses’” and “Spectral Flowers”. 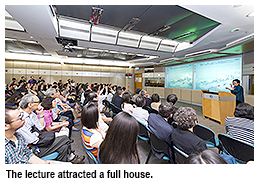 This exhibition was also held at the Basilica of Holy Cross in Florence, Italy, bringing the works of the prominent Italian artist back to his home country. It has now moved to Hong Kong and can be seen at 18/F, Academic 3 at CityU until 31 July. Along with the three artworks mentioned above, another six new media artworks for this exhibition were specially produced by SCM.

This exhibition is the second collaborative project between CityU and NPM, and follows on from last year’s “Rebuilding the Tong-an Ships New Media Art Exhibition”.