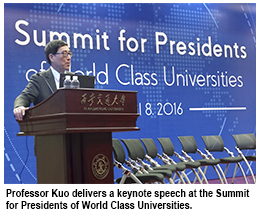 Professor Kuo delivered a keynote speech on “University’s Mission and Diverse Cultures” at the Summit for Presidents of World Class Universities on 8 April.

He said a person could be successful with or without a degree, adding that there were successful people in various fields who didn’t hold a doctoral degree, citing the Chinese Nobel Prize winner Tu Youyou as an example.

One of the missions of universities should be to help students unleash their potential and be successful, he said.

The Summit invited presidents of globally reputable institutions to engage in discussions on elevating higher education and research excellence. 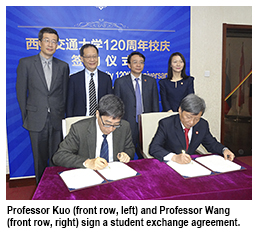 In addition, the agreement on student exchange between the two institutions was renewed and signed by Professor Kuo and Professor Wang Shuguo, President of XJTU on 9 April.

CityU also signed a memorandum of understanding (MOU) with XJTU under the framework of the University Alliance of Silk Road (UASR) aimed at fostering academic exchange and cooperation. Nearly 130 universities from 31 countries and regions have participated in UASR, which is a non-government and non-profitable organisation aimed at openness and international cooperation in higher education.

Besides, CityU participated in the Xi’an World Class Universities Expo held from 7 to 10 April.

The Expo, co-organised by Xi’an Municipal Government and XJTU as part of the 120th anniversary celebrations of XJTU, was aimed to enhance student recruitment and promotion activities of world class universities in western China. More than 60 top global universities took part in the Expo.