Professor Clarke discussed the use of data mining to identify promising classes of materials, and stressed the importance of seeking thermoelectrics based on earth abundant, non-toxic elements in his talk titled “Progress Towards High-Temperature Thermoelectric Materials for Electric Power Generation” on 17 March.
He also talked about the current status of thermoelectric materials, and shared his exploration of compounds that have a natural superlattice structure to produce a coarsening-resistant microstructure so that thermoelectric properties will not degrade over time. 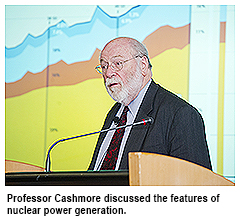 On 22 March, Professor Cashmore delivered a lecture titled “Sustainable Energy and a Sustainable Environment for the 21st Century: The Role of Nuclear Power Generation”.
Professor Cashmore is a Fellow of the Royal Society, and a Professor of Experimental Physics in Oxford.
He stated that climate change was happening as a result of the high global emission of CO2, and therefore urged that the use of fossil fuels be reduced and substituted using renewable and nuclear energy.
He gave examples on how nuclear energy is an effective and safe way for power generation.