‘Soulware’ is essential in higher education 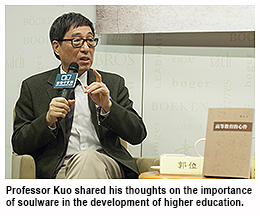 The development of “soulware” is essential for cross-strait higher education institutions aiming for world-class status, according to Professor Way Kuo, President of City University of Hong Kong (CityU), at a launch ceremony on 8 March for his new book titled The Soulware within Higher Education.
The word soulware means a type of culture, mentality, behaviour and thinking pattern, according to Professor Kuo.
“Soulware is indispensable to the education sector and our society even if you are equipped with sufficient software and hardware,” he said.
The Soulware within Higher Education covers four topics: internationalisation of higher education, the integration of teaching and research, quality and valuation of higher education, and creativity and innovation.
The book says that one of the main reasons the regional colleges and universities lag behind their counterparts in developed countries is that our soulware can’t stay relevant.
Professor Frederick Ma Si-hang, former Secretary for Commerce and Economic Development of the HKSAR Government, shared his insights and experience about the development of higher education during a dialogue with Professor Kuo at the launch. 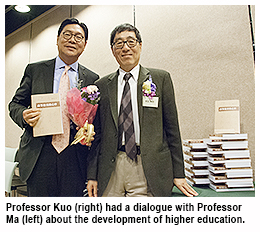 Professor Ma said he had been impressed by Professor Kuo’s views about the significant role that research plays in higher education and that he wanted to enhance his understanding of both the relationship between teaching and research in university education and the importance of research in higher education.
Research had long been neglected in cross-strait higher education, as had innovation, Professor Kuo pointed out. In addition, teaching and research are often separated in many regional universities, i.e., teaching staff teach but don’t do research; and research staff research and don’t teach.
Moreover, universities had an important role to play in nurturing talent and promoting the spirit of discovery and innovation, said Professor Kuo, adding that he believed teaching and research should complement each other seamlessly.
“Research is indispensable if you want better results. Even a chef has to do some research before cooking!” he said.
Professor Kuo cited similarities in the cross-strait higher education sectors, especially in terms of pursuing a college degree. He said that knowledge didn’t necessarily stem from one’s degree; what really mattered was to “capture the essence of the books” and apply what you learn in school to the outside world.
With regard to language and communication, Professor Kuo said we should note that language was only a communication tool, and that internationalisation meant more than acquiring a higher proficiency in English. The message and the content were much more vital in communication, he added. 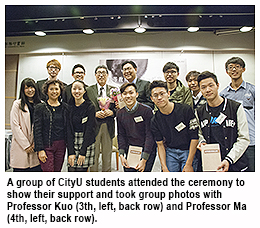 During his dialogue with the CityU president, Professor Ma said he was impressed that CityU had climbed to 57th in the latest QS World University Rankings in such a short period.
Professor Kuo said rankings had been the driver behind improving quality in all industries for nearly 30 years, but that they should not be regarded as the ultimate goal but as a reference factor that could help a university improve the quality of its performance using positive soulware.
Combining teaching and research was very important and we should promote a spirit of doing research in teaching, he said, which explains why CityU had introduced its pioneering Discovery-enriched Curriculum and why the president emphasised the importance of “soulware”.
Before concluding his talk with Professor Kuo, Professor Ma, who majored in history during his undergraduate years, discussed the importance of studying history. He said the discipline of history used to be quite “hot” in universities because it could help students learn about the past, understand the present, and have a vision of the future.
Studying history could also help students hone their debating and research skills, he said, but the subject didn’t receive as much attention these days, a situation he believed should be addressed.
Royalties from the book of Hong Kong edition would be donated towards a scholarship for CityU students, Professor Kuo said.