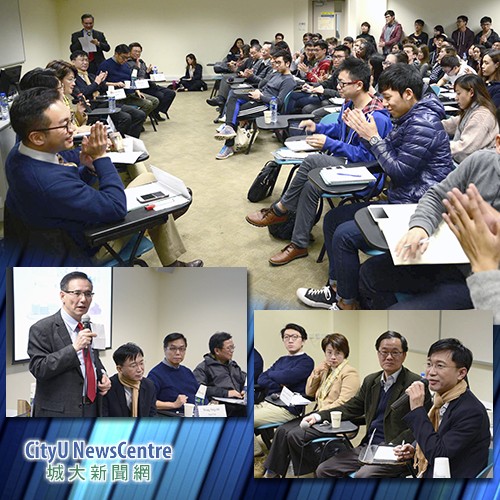 Local politicians who ran in the LegCo by-election for New Territories East were invited to address students at City University of Hong Kong (CityU) during a forum held by the Department of Public Policy (POL) on 19 February.

The election was held on 28 February.

During the talks, students had the opportunity to interact with candidates and apply their knowledge to analyse real-life political development.

All candidates but one attended. They introduced their platforms and answered questions. The topics discussed ranged from the role of the media in an election campaign and the governance of the HKSAR government to the recent Mong Kok riot over the Chinese New Year period.

Catherine Hui Tsz-ching, a Year 2 POL student, said that the forum had enhanced her understanding of the complex relationship between the media and politics.

Monika Horinkova, an exchange student taking the course “Politics and Media” in POL, said the forum had been a precious learning opportunity since overseas students seldom had the chance to meet local politicians in Hong Kong.